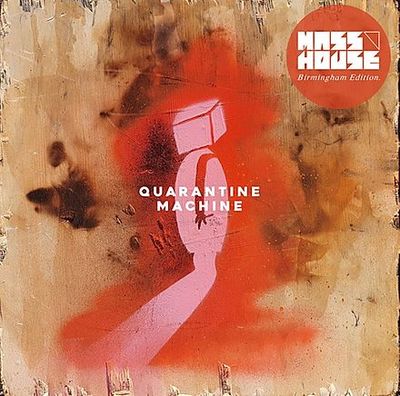 Where most of us have spent quarantine binge-watching Netflix and trying not to have a nap for the fourth time that day, Mass House have utilised the enduring force of bored musicians with nothing to do but create a masterpiece. ‘Quarantine Machine,’ their latest venture, is a stunning compilation of infectious melodies, interesting sounds and introspective lyrics on life in their home city of Birmingham. The duo, made up of lifelong friends Dylan Williams and Tom Minchin, is set to liberate the songwriting styles of 21st century British Indie through the nuanced integration of varying genres. Having much experience performing live, namely supporting artists such as The Chemical Brothers, The Charlatans and Liam Gallagher with their previous band DUMB, learning to produce became the refreshing catalyst for Mass House’s distinctive new sound. The self-professed ’80’s inspired’ influence, when coupled with the subtle influences of the underground Brum scene, culminates in a sound mirroring a generation that both treasures the roots of its past whilst fervently pushing for progress. ‘Birmingham,’ the latest single from Mass House, speaks of the love and hate relationship the pair have with their hometown. Over the tracks punching bass line and staggered beat, lead singer Dylan ponders over the juxtaposing pulls of the greener grass of other cities or the roots that bind them to Birmingham. With a slightly delayed release due to the pandemic, Mass House offered an anthem at a perfect time for those of us suddenly stuck back in our home town, navigating this “Stockholm syndrome” the duo profess the song is about. Let’s face it, we have all lost some dignity wasted on the streets of where we grew up, Mass House just gave us a reason to sing about it. Their latest musical venture, ‘Quarantine Machine,’ showcases the musical diversity that ratifies Birmingham as an integral artery in the heart of the Northern music scene. Mass House honour the diverse range of personalities that stem from the city and a heritage being diminished by a redevelopment overtaking the brutalist Birmingham they've grown to love. Where their inspiration stems from a “city at its’ greyest”, their music is anything but. All ten tracks that compile 'Quarantine Machine' unravel more of the duo’s genius; through swelling synths, intricately designed drum patterns and bass lines that will make you do that face, Mass House showcase an eclectic mix of the most exciting and progressive artists at the heart of the DIY musical insurgence. Lockdown has started a revolution of DIY music and Mass House are the torchbearers. 'Quarantine Machine' was both a reason to "bring artists together and give them a platform to release stuff" where gigs and live shows have been impossible, yet alongside Mass House are doing their bit during the pandemic; "We want to harness the resistance music has against tragic circumstances to help with the fight against Covid-19." Assuredly, they have. Releasing the collection on Bandcamp, the duo ask for a donation of your choosing with all the proceeds going to food banks around Birmingham. With both a Birmingham and a Bristol edition available there really is no reason not to get behind the most innovative and refreshing sound to come out of isolation so far. Find 'Quarantine Machine' (both the Bristol and Birmingham edition) on Bandcamp here: https://masshouse.bandcamp.com