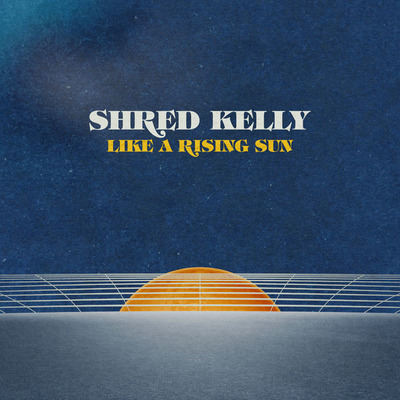 Following on from lead single ‘Dead Leaves’, Canadian five-piece Shred Kelly have released their new album ‘Like a Rising Sun’, (their fifth studio album, no less.)

Where ‘Dead Leaves’ had that Counting Crows style unashamedly stamped over it, opening two tracks 'Rising Sun' and 'Roman Candle Eyes' are still firmly rooted in folk-rock but the first thing Tim Newton’s vocals and guitar remind me of is rockers Biffy Clyro. 'Dead Leaves' and 'Take me Home' then take us back to the banjo lead folk that they have stamped their mark on but when track 'You Almost Meant the World To Me' comes in, is a standout moment for me as Sage McBride takes over lead vocal duties. It’s a beautifully haunting track and embodies what the band are trying to say on the album as a whole and it is them at their most raw and emotional. This for me has to be their next single as the potential for this track is huge.

The band come into their own on track ‘Underground' and showcases their tight musicianship with some gorgeous baselines and harmonising between the two vocalists.

On last track 'Disconnect' the banjos and folk are abandoned for distorted fuzzy guitars and a galloping soundscape to create a straight-up singalong rock track that for me is perfect to close out this album that even at over eight minutes long you feel disappointment when it comes to an end.

Overall this a very open and honest album and the band have laid their personal lives on the table. This has served them well as this is by far their best body of work. I am really excited to see what they do next. Bring on that sixth studio album - we're waiting!