Soccer 96 Get Their Tactics Spot On 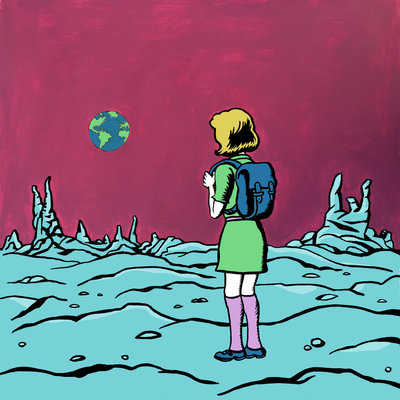 Soccer 96 is the brainchild of Dan Leavers, known as Danalogue, and Max Hallett known as Betamax. They have previously recorded as two thirds of The Comet is Coming, a group who were Mercury nominated for debut album 'Channel the Spirits'. This time they have teamed up with Alabaster de Plume on vocals and Kristian Craig Robinson known as Capitol K to deliver the Tactics EP.

'I was Gonna Fight Fascism' is a sarcastic, bleak and very funny takedown of keyboard warriors who keep talking about the importance of standing up for what they believe in. When the crunch comes, though, they are full of excuses from being tired to having a lot on through to the left wing spectrum not really applying in the modern age and writing things on Facebook because they didn’t really like the other people fighting fascism! Alabaster de Plume’s vocals are just magnificent with his ability to deliver the trenchant lyrics in a way that is threatening. This suits the powerful unsettling synth accompaniment which gives the track a real immediacy. It ends in a welter of feedback that almost becomes a piece of freeform jazz. It really is a strong opening track for the EP.
'Children will Dance' has a Pet Shop Boys style intro which reminds me of Surburbia and another doom-laden vocal performance that once again unsettles the listener. The message of the track is that while we watch the children dance we are ignoring what is actually going on. Those in charge can get away with anything if they entertain us and take our minds off of what is really happening. Given the way that distraction is now an accepted political tactic it is spot on however much we wish we could believe it is wrong. For me, the deeper and more disconcerting message of this track is that nothing will change.

'Buy It' is a brilliant broadside against our increasingly consumerist society where everything is yours – at a price. It takes in the personal, the social and the political and tells us that everything we pretend to hold dear is available at a price, either to buy into or perhaps to sell out. As with the previous two tracks there is little or no positivity but there is little or nothing you can argue with. They see the dark side of society and, like many of us, are afraid that it has got the upper hand and will not relinquish it.

This is a very dark trio of tracks that is giving us a message that we ignore at our peril, but like the very best agitprop from all strands of the arts it does this in a very engaging way which gives it its power. It is a record that deserves to be listened to both as a message and, equally importantly, as a brilliant EP of synth tunes.