Society For Cutting Up Men (Single)

Cutting Through The Excuses 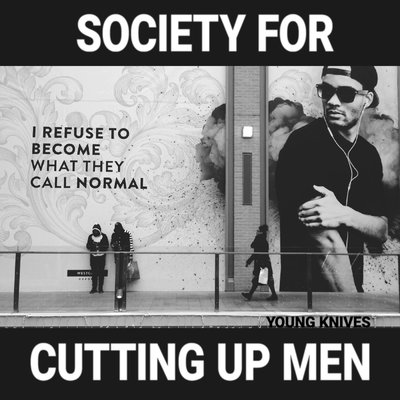 Society For Cutting Up Men (Single)

Young Knives are the brothers Henry Dartnall on guitar, Thomas Dartnall who is known as ‘The House of Lords’(!) on bass and Oliver Askew the drummer. They have been around for a long time, forming in 2002 and being nominated for the Mercury Prize in 2007. Their new track, ‘The Society for Cutting Up Men’ is the third single from their forthcoming album ‘Barbarians’, which is due for release in September. The title comes from a feminist manifesto written by Valerie Solanas which proposes that the only way to change society is to get rid of the men at the top with a violent uprising.

It starts off with a bluesy guitar riff before opening up into a tune that reminds me of ‘Ghost Town’ in the way it immediately throws you off balance and makes you uneasy. The lyrics are similarly immediate and unsettling as they talk about the public as a ‘spoon fed audience’ who believe everything they are told by the men in charge. The Kraftwerk style dehumanised vocals are another element that makes the listener question the way that we are, perhaps mechanically, following the patriarchal edicts handed down to us without really questioning them. Young Knives turn threatening when they talk about the rage and the layers underground which are ready to rise up and wreak vengeance. The chorus which proclaims that ‘The Scum of the earth will rise to the top’ is bleak, frightening and brilliant in a way that reminds me of the chorus of ‘Eighth Day’. There is no question that this group are taking the ideas seriously and they are issuing the warning that it may be necessary, and it may not be long before it happens. The discordant guitars and insistent drumming serve to keep you on edge throughout from the first note to last.

There is a huge amount of anger and intelligence as Young Knives review the current state of our dysfunctional world. It is music that is making an important point and doing so in an uncompromising way. Young Knives follow the example of the artists of the early 80s who saw the world going wrong and wanted to warn everyone before it is too late.