Bleak And Brilliant Dissection Of Society 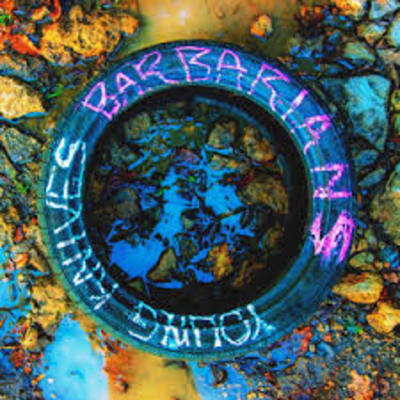 Young Knives, brothers Henry and Thomas Dartnell, have been around for nearly two decades making music that demands you listen carefully to their view of where society has gone wrong. With everything that is happening in the world at the moment, it is perhaps not surprising that their new album 'Barbarians' finds them at their bleakest ever.

‘Swarm’ starts off the album with distorted guitars in what seems like a deliberate attempt to throw you off balance. The lyrics are about the way in which you become part of the collective and lose your individuality along the way. It is a thoroughly unsettling start to the album that gives you a taste of what’s to come. The second track is the brilliant ‘Society for Cutting up Men’ which deals with the way in which men use power of many kinds to keep women in second place. It warns men in no uncertain terms that their time at the top will come to an end sooner or later. ‘Jenny Haniver’ starts off with a deceptively softly played guitar before coming in with discordant synthesised interludes that once again unsettle the listener. It is like being in a psychological horror of your own making as you try to pick out the lyrics that seem to fade into the music and the track ends up with snatches of very disorienting interference as someone tries to find a radio station. ‘Red Cherries’ sounds like Depeche Mode from their 'Some Great Reward' era, but even that album wasn’t as hard hitting as this. It seems to be demanding to know why so many people have died before their time and what their names were in a way that is similar to the current concerns of protesters across the world. The next track ‘I am Awake’ sees a situation where the British population have sleepwalked their way to a situation that it is too late to fix and only a few people have been awake enough to notice. What Young Knives are talking about there is anyone’s guess! ‘Holy Name 68’ is a chant that sounds like it may be in a different language, but equally it could be a distorted version of There’s No Place like Home! This album never stops playing with your expectations and confounding you. The title track ‘Barbarians’ starts with snatches of shouting prior to what seems like it’s going to be a fight or a beating. This gives way to a full-on punk track that really sets up their central view that mankind is merely a barbarian with technology. ‘Sheep Tick’ starts with the lines ‘In this music is housed all my disappointment’ and if there is a Young Knives manifesto it is this. Penultimate track ‘Only a God’ is a doom laden piece of music that turns into a shout of rage before a more positive sounding voice – perhaps God himself – tells the listener that they have done well but then pulls the rug out by saying that it doesn’t make any difference because there are no places left for anyone so they are doomed anyway! By the time you get to the final track ‘What I Saw’ you do not know what to expect. What you get is a plea for someone to lead people into the light and a chorus that is relatively upbeat compared to the rest of the album. Normal service is resumed in the angry verses but it at least seems to say that there might be hope at last.

To listen to this album is to be disoriented, unsettled and put through the emotional wringer. It is the most frightening album I have ever listened to, and quite possibly the most brilliantly bleak album ever made. Young Knives have had a nod from the Mercury Prize committee already when 'Voices of Animals and Men', their first album was nominated back in 2007. If the committee doesn’t give them a second nomination for this incredible piece of work it will be a travesty.