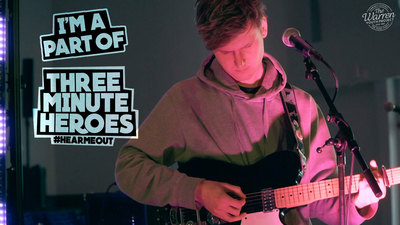 Seemingly connected to an album about mental health, this track has taken over my days in recent weeks. With a real bedroom production sound to it, I wasn't sure how to take it at first but over time it's become a real ear-worm and now I can't get enough!

Looking into the artist, Joe Russell-Brown is from Hull, a city that's thrown up much good talent in recent years including post punk band Life and grime star Chiedu Oraka to name a few. However, I digress . . . back to Joe who records everything on a cheap microphone and laptop in his gran's bungalow having progressed from acoustic songwriter to a more lo-fi anthemic sound.

This track is definitely lo-fi and over time has become most certainly anthemic, in mind anyway. The sluggish chug of a guitar groove, slightly reminiscent of Nirvana's 'Something In The Way', is magical in that it's almost always on the verge of totally collapsing, but instead keeps on growing and picking up momentum as the track passes. The slightly fumbled drums only add to the music's naive charm and with touches of Bill Ryder-Jones meets Thom Yorke in the vocals, it's a real shame I can't hear the lyrics too well - but hey, maybe that adds to the overall mystery. There's even a tastefully underplayed guitar solo to complete the package.

Would definitely like to hear more from Joe Russell-Brown and hopefully I get to check out this album where the track came from (it's called Three Minute Heroes Vol2 btw and out in September). Hull gone and done it again - nice one!