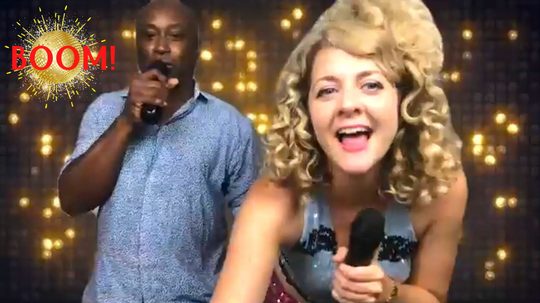 Why stay isolated when you can party with others from the comfort of your own home? That’s precisely the mentality of the fantastic BOOM! Online Dance Parties which have been lighting up the rooms of the so-called ‘Boomers!’ attending. Last Saturday’s party was no exception…

Headlining this recent event on August 22nd, was the ever in-demand ‘Purple Disco Machine’, an International DJ, producer and remixer who has been on a whirlwind of a musical journey since the 2009 conception of his highly successful disco house music project. He has racked up millions of streams on digital platforms including Spotify. A perfect choice for a BOOM! headline act, with his disco sensibilities and mesh of mellow and uplifting house music.

BOOM! Online Dance Parties was founded by music industry legend - songwriter Dominic Roy King. He has been releasing dance music under the alias BOOM! for the past year, including the top ten dance hit ‘Lockdown’. Now, BOOM! has also shifted towards being an online party collective gifting us with gigs from some of the hottest names on the scene right now. King has teamed up with party hosts and organisers Roxy Deniz Ozalp of Morning Gloryville and Iona McNeil of Burning Man, to bring us an event filled to the brim with incredible music, outrageous amounts of glitter and, if you’re lucky, sensational prizes.

Last Saturday’s event saw up-and-coming duo Moodbay knock it out of the park with their latest dance hit ‘I Got You’, as well as killer DJ sets from Caz Coronel and Syreeta, and a soul-sational performance from Matthew Winchester of Cool Million, singing a new remix of ‘Keep On’ from the band's number one soul album ’Stronger'. 3 hours of non-stop music, also accompanied by the stunning outfits and sensational dance routines of Crystal Danielle, this was a night to remember, that’s for sure. I can’t wait for the next one!

There were so many cool moments at Boom! but here's a taste of some international good vibes to an old school classic (see video below!) Even videos of the event cannot match the sheer thrill of participating and seeing yourself and everyone at the party spotlighted on screen. With the ticket price only £7 per household, there really is no reason not to get involved in BOOM! Glittery good times for all!

With life as we’ve known it still at an unfortunate standstill, there’s no doubt we’ve all been missing that undeniable thrill of seeing music live. So why not change out of that hoodie! Follow all things BOOM! www.boomdanceparties.com