Treason Of The Monarchy (EP)

Treason of the Monarchy

Heading For The Tower But They Don’t Care! 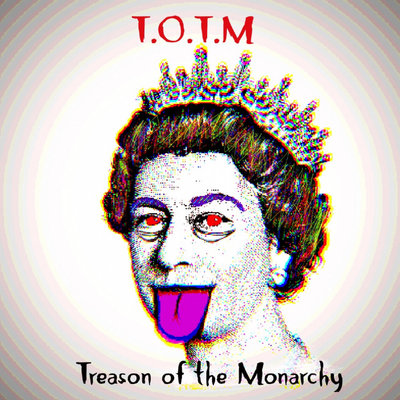 Treason Of The Monarchy (EP)

Treason of the Monarchy

Treason of the Monarchy are a punk band featuring songwriter Tim Fish and singer John Warwick. Their debut self-titled EP brings back the snarling, socially aware punk of the late 70s with the monarchy and the class system in their sights.

The opening track, 'Treason of the Monarchy' goes further than even the Sex Pistols did in including a sweary monologue by ‘Queen Elizabeth’ herself! It rails against the way that the monarchy takes money from the state and whether you agree with their argument you cannot ignore the sheer anger of the lyrics. The anger continues with 'On the Coals' which looks at the sorry state of politics which has very seldom seemed worse and is entirely deserving of their anger and cynicism. 'Die Toten der Werwolfe' encourages the listener to rise up against the system and is a fist pumping call to arms. 'It Wasn’t You' is a song about drugs and the way they take over your life and turn you into someone who is no longer someone you recognise. It is a really well written song that dresses up a serious issue in the ‘Oi!’ style of Sham 69 and other punk bands who wanted to bring music to working class youth. You can tell that Treason of the Monarchy are more than just a tribute act. They have punk flowing through their veins and are determined to resurrect it as a musical genre for a new generation. 'Head in the Shed' and 'They Say' are two songs that reflect the difficulty of being yourself in a modern world which puts so much store on image. There seems to be an element of wistfulness with 'Fish and Warwick' looking back to the original punks who were themselves with no compromises. 'The Apprentice has a Hard-on' is the type of gleeful smut that the Pistols channelled in 'Friggin in the Riggin' and is a fun finish to the seven original songs on this EP.

Treason of the Monarchy are a no holds barred punk band with the courage of their convictions. They won’t be to everyone’s tastes, but they don’t want to be. If you have a punk sensibility and you enjoy confrontational lyrics then this is definitely for you. Punk’s not dead when bands like this are still flying the flag for those who want to tweak the tail of those who own and run the country.