A Journey Through A Life And A City 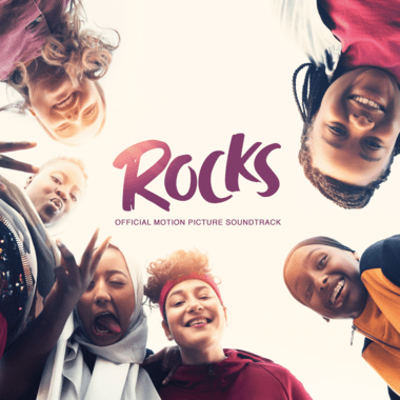 'Rocks' is the soundtrack to the soon to be released film that tells the story of Rocks, a young Black British girl in London who is forced to fend for herself and look after her brother after being abandoned by her mother. She is helped by her loyal group of friends and this forms the emotional core of the film. The soundtrack showcases a huge range of modern British music, but what becomes clear as you listen is that each song takes you through the journey of Rocks herself.

The soundtrack starts off with the simply stunning 'Warrior' by RAY BLK. Over a subdued instrumental background RAY BLK’s voice soars as she tells the story of Rocks. The struggles of her life are laid bare, but the repeated defiant chant of ‘I’m a warrior’ makes it clear that she is not going to give up. It’s a great track and one that will almost certainly become a modern classic. Duchess contributes the second track 'Hurting', a soft reggae inflected ballad that sounds gorgeous thanks to her fantastic vocal performance. Duchess’ voice is spine-tingling and clear as a bell as it swoops to the top of its range with little apparent effort but then adds some grit that reflects the film’s subject matter. 'Darker Times' by a’B with Jevon sees Rocks asking for some direction in her life. It is a short song that packs in a huge amount, not least a superb vocal performance from a’B. 'Proud Mary', the old Creedence Clearwater Revival track is given a deeply affecting choral makeover by the film’s cast that takes a song many people know and turns it into a completely different experience. When the cast reaches the refrain ‘The power of my skin, it comes from deep within’ it is given an almost spiritual dimension of extra strength. CHRISSY sings the next track 'Sun Don’t Set' with a lightness of touch that belies the lyrics. As with all the songs there is a defiance and a determination despite the difficulties of Rocks and the other characters.

The next two songs, 'Throne' by Koffee and '16 Shots' by Stefflon Don are harder edged and really powerful both musically and lyrically. 'Think About You' by Tiana Major9 returns to the softer reggae style wrapped around a song of longing for an unrequited love. It’s another beautiful vocal performance.

Nobody is defiant from its first line ‘Tell ‘em I don’t bow down to nobody’ and tells the story of a person who won’t let go of the things that are important to her no matter how hard life gets. Jorja Smith’s 'Blue Lights' reflects the initial feelings that a lot of people in non-white communities have when they see the police. The song tells them not to run because they haven’t done anything wrong. It’s a powerful piece of music from beginning to end. '6 Feet Under' by Lola Young is a very unsettling song which reflects on the destructive thoughts that a lot of young people have and puts a huge amount of experience and emotion into deceptively simple lyrics. 'Below' by Tora carries on the theme of struggles both external and internal via an insistent beat and cleverly constructed lyrics.

Shaybo’s 'Anger' features uncompromising lyrics come from the streets and her rapping style is a combination of coolness and the anger of the title as she sees her reputation being trashed by other people who don’t know her. 'Gangsta' by Darkoo featuring Br3nya and Ms Banks is a defiant song that tells everyone to stay clear because this is one girl you don’t want to mess with.

Lost Girl contributes 'I Won’t Give Up', a return to the more positive tone of the earlier tracks as Rocks’ journey appears to be on the up once again. 'Confidence' by RAYE, Maleek Berry and Nana Rogues continues the upward trajectory with a sunny upbeat song that is really catchy. 'Picture Perfect', a track by Little Simz tells us ‘On my life there's wonder and terror and beauty and danger Independent here on my own still doing it major’. This is someone who won’t be beaten. 'Soulboy' by p-rallel and Greentea Peng is a song of gratitude to the person whose support has changed her life around. It sounds like a classic reggae song, but it wears its influences lightly as it brings them up to date.

'A Little of Your Time' by Mae Muller is a sweetly sung plea to someone to support her, not by sorting out her life but as she says, ‘I don't ask for much, hold me tight
Just a little of your time, is that alright?’ It is an absolutely gorgeous song that is one of my favourites on the entire soundtrack. As Rocks says in 'Lately' by Celeste and Gotts Street Park ‘Lately I’ve been useless’ but you can tell that she knows that the person she’s talking to will forgive her. Midas the Jagaban’s 'Come We Bill Eh' sees Rocks on cloud nine as she ‘is with her guys tonight’, reflecting the film’s message about the importance of friendship and support. 'I’ve Been Falling Higher' is a great track from Gaidaa that sees Rocks starting to get things sorted even though she has always wanted more than she can handle.

Br3nya and Hamzaa collaborate on 'Sis', a song celebrating Rocks and her determination to rise above the challenges life has thrown at her. 'Buss A9' by Sharna Bass is a defiant kickback against the boyfriend that abandoned her. It’s clear that she doesn’t need him any more and that he is the one who has lost out. 'Fine Line' by Mabel and Not3s tells anyone who wants to take her on that ‘I'm all in, all in, so follow me with your every move’. This is a woman taking control of all aspects of her life and it has an uplifting feel that reflects that sentiment. This is reinforced by the following song 'Seen Me Like This' by Kali Claire where she accepts that if she is hurt it is partly her fault for letting someone else in before she is absolutely sure. In Tamera’s Flipside she takes control by telling him that she wants her own space but that he can catch her on the flipside. The next song, 'Cut Ties' is a smoky tune where Rocks tells her boyfriend that she has to call it quits. It is not angry or regretful, just matter of fact and all the more impactful because of that. 'Something New' by Dolapo and Hardy Caprio is unusual in this soundtrack in that it reflects the POV of the boyfriend telling her that actually he has tried his best but that he realises that they should never have got involved. The final song on the soundtrack, 'For Keeps' by JGrrey, ends it on a really upbeat note telling Rocks that ‘It's all yours, everything you wants for keeps, everything you wanna be’.

This is a truly superb soundtrack not just in terms of the songs, brilliant though they are, but in their places in the soundtrack’s role to tell the story of Rocks. I can’t remember coming across a better constructed soundtrack album. If the film is anything like as good it is going to be a modern classic.