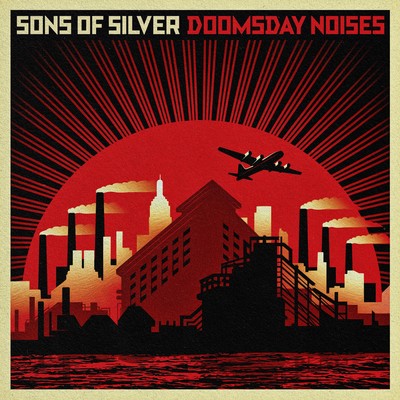 Sons of Silver deliver texturally rich, guitar-driven rock n' roll at every turn. Their new release 'Doomsday Noises' manages to take on tough topics of the times without picking a side, while they encompass understanding, unity, musical diversity and passion.

The band’s name might be new to you, but the members will not be, as each has already made their mark in the music world before coming together to unify their talents. Sons of Silver is led by singer Peter Argyropoulos, who previously recorded and toured under the name Pete RG, the lineup also includes Rock & Roll Hall of Famer Dave Krusen, the original drummer for Pearl Jam and current member of Candlebox, with Candlebox bandmate Adam Kury on bass, former Skillet guitarist Kevin Haaland, and keyboardist / studio engineer Brina Kabler rounds out the signature sound.

The songs on ‘Doomsday Noises’ were born from jam sessions that took place in 2019, but you would never know it by listening to the timely lyrics that could be the soundtrack of the Armageddon of 2020.

Argyropoulos’s dusty vocals open the EP with a strong kick with “Rude Awakenings” as drummer Krusen lays down a tight beat and guitarist Haaland delivers a heavy-duty solo.
In the midst of a global pandemic, the song “Outbreak” was eerily written and recorded before any of us heard the word Coronavirus and it expertly delivers elements alt rock with edgy blues.

Changing the vibe, "Deep Division" effortlessly grooves and showcases the undeniable chemistry between the musicians, with striking melody and a well-timed chorus.
On “Read ‘Em Their Rights” gritty vocals deliver an important message as Argyropoulos sings, “FBI, CIA, IRS and NSA Presidents to bureaucrats, trickle down incompetence Growing taxes, growing debts Growing pressures, growing threats Growing price of arrogance” these words of warning are backed by break the door down riffs and a hooky chorus.

Ending the EP with “World On Fire” the musical equivalent to something many of us are feeling about the current state of the world, backed by gritty blues, a funky strut, and rock n roll swagger. 'Doomsday Noises' is a release filled with standout tracks that all have a message if we can only open our minds enough to hear it.

Sons of Silver keep a middle ground while introducing their melodic yet gritty noise renaissance, this is smart rock n’ roll and a collection of silvery anthems that further illustrate that if you listen music can change the our world.