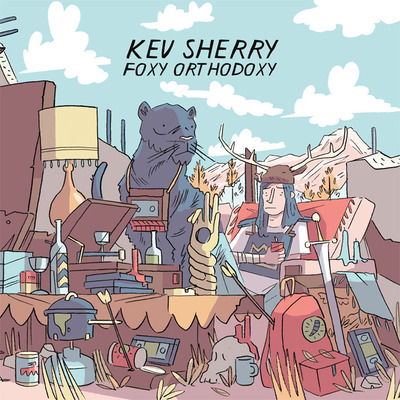 Lyrical themes on his debut solo album 'Foxy Orthodoxy' (yes – I do really like saying that!) cross over with some of themes from the existing graphic comic and touch on the peer pressure of social media, politics & religion challenging our ability to be uniquely & truly ourselves. The jangly pop breeziness of some of the songs bring to mind Teenage Fanclub, the Lemonheads and the Lightning Seeds.

It’s a strong album musically and lyrically, but 'Bluff' and 'Wasted Days' are immediate favourites – the latter being beautiful missive; “never said what I wanted to say, fallen roses and the summer sun, by the trail of broken hearts all alone, and my wasted days…”.

On all the songs Kev Sherry’s lovely Scottish accent shines through, something which I really enjoy hearing. I look forward to spending my autumn evenings enveloped by the warm tones of the guitar, adrift on a wave of melodies and accompanied by the richness of Kev Sherry’s voice. Whether you're politically minded or not you'll enjoy this album for its sonic brilliance. Personally, I like my serious zeitgeist issues served juxtaposed with cleverly upbeat vibes. Highly recommend.