Put It On The Line (Single)

World Goes Round's New Single ‘Put It On The Line’ 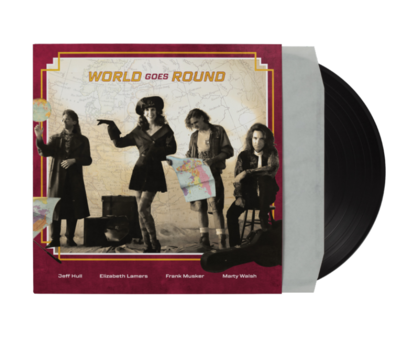 Put It On The Line (Single)

World Goes Round will release a third single ‘Put It On The Line’, from their stunning upcoming album, out later this month. I’ve had a sneak preview of this album and trust me, you are going to want to hear it from start to finish, with a good glass of wine.

Dubbed "THE KILLER LA SUPERGROUP THAT NEVER WAS”, this an amazing group from the 80s. They are all very successful songwriters & musicians in their own rights - between them they had either written for, sung with or played on records by a string of major artists and producers like Linda Ronstadt, Queen, Chaka Khan, Brenda Russell, Jeffrey Osborne, John Denver, Supertramp, John Fogerty, Quincy Jones, Arif Mardin, Air Supply – the list is too long to quote in full. These four friends created this album all those years ago which has never seen the light of day until now! Expect to hear quality - a lesson even - in great songwriting.

Following on from the success of their singles ‘Big House’ and most recently, ‘Round The World’, ‘Put It On The Line’ is a song about overcoming fear and self doubt - emotions common to every single one of us. It is dedicated to all the ordinary every day heroes everywhere who put themselves on the line and in harm's way each and every day for us - the ones who just turn up come what may and do their duty whatever the cost.

The track is layered with luscious vocals from Elizabeth Lamers and, of course, the lead vocal of Frank Musker who sings memorable and ever-relevant lyrics, as if in ode to the nurses, the doctors, the health workers, the firemen, the soldiers and to all those who daily overcome resistance and their own perceived limitations - this is a song for all these heroes. ‘Put It On The Line’ is a catchy pop-rock ballad with melodic guitar riffs and a rhythm section cool enough to relax to, yet groovy enough to make you move.

The album from World Goes Round is out later this month via Viper Records. All of the singles and album are available to stream and download on all major platforms.

For all things WGR, check out the website: www.worldgoesround.info