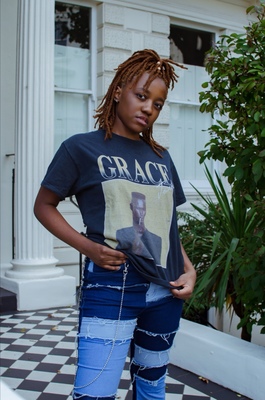 Tanaka Makoni brings her quality back to the top of the game with her new release 'The Streets'. The single is to come out officially in a few days, but I was lucky enough to grab a sneak peek before its big release.

Following on from where she left off with, 'Lust', Tanaka smashes the nail firmly on the head once again. Furthermore, her delivery is charismatic, and her approach to songwriting is refreshing given the number of hip hop tracks which follow a generic foundation.

It all gets underway with a soulful, jazzy arrangement with Tanaka layering her lead hook correctly. The mix suddenly becomes even more fearless with Tanaka reaching for the mic with conviction. She sings with her signature tone flourishing as the verse progresses.

The chorus is as catchy as they come with a melody which sticks like glue. Also, Tanaka includes the correct amount of harmonies which I believe she has learnt from her last hit. Furthermore, her harmonies add even more weight to her already full sound, and they give the piece the stereo effect which it craves.

Towards the latter, Tanaka becomes even more potent with her vocal cutting through with bite. Also, the foundation glides through the airwaves with a beat which will have you swaying along in little time. Additionally, I enjoy how the singer gets her message across well with her expressing her story of growing up in London. Moreover, she sings with no ambiguity, and she proves she is just as strong a storyteller as a songwriter.