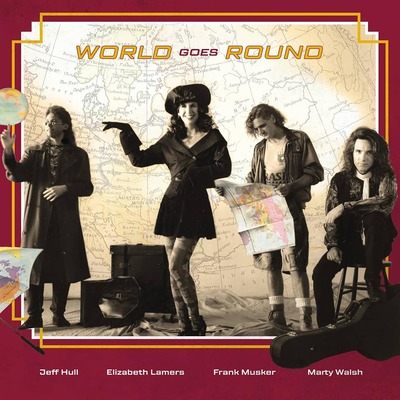 World Goes Round are schooling all us youngens on the timeless sounds of the eighties as they burst onto the music scene with their debut album this year. Claiming the same moniker as their band, this musical goldmine is only just seeing the light of day as it spent over thirty years collecting dust as a vintage cassette. With all the doom and gloom of our current climate, perhaps this treasure chest of musical mastery being released into the atmosphere is exaclty what we need. Made up of Frank Musker, Elizabeth Lamers, Jeff Hull and Marty Walsh, the band boasts an overwhelmingly impressive roster of collaborations between them - Chaka Khan, Queen and Quincy Jones to name but a few of an incredibly well-renowned list. With the production legend Tommy Vicari - the mind behind the sounds of Prince, Barbra Streisand and a whole host of other music icons - mixing the tracks straight from cassette, World Goes Round's singles have illuminated popular music since their first release last May. Whislt the music may have languished unheard for thirty years, it is no antique. Ageing like a fine wine, World Goes Round repetoire is as revelant and fresh as ever.

Rooted in the classic synth stabs and pulsing drums of the eighties, each track is oozing the energy and effortless electricity of the eighties we know and love. Bursting into the vibrant atmosphere of this body of work, ‘Rebel Heart’ is swimming with the soulful, synth-based sounds that the industry titans sculpt so well. ‘Joy and Pain’ boasts the beautiful blending of the latin inflections and fundamental funk of eighties disco, accumulating in an undeniable dance groove.

‘Big House,’ the groups first single to burst onto the scene, speaks on the vital issue of climate change, despite being penned thirty years ago. World Goes Round is the epitome of being ahead of your time. All ten tracks in this versatile body of work is rich with uplifting vibes and an infectious throwback feel. Whilst the current climate might be a gloomy one, the release of World Goes Round album might just what we’re looking for to bring the good vibes to our lockdown bedrooms.