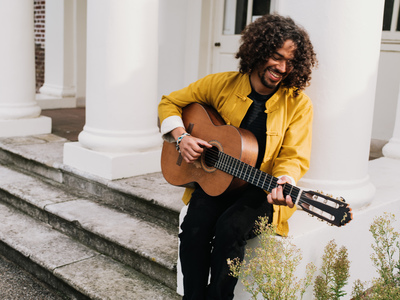 From South London. Sugarcane is the creation of Robin French who played ‘Later With Jools Holland’ and toured with Amy Winehouse, with his former band Mr Hudson and the Library. Robin is now well-known as a playwright and screenwriter - creating and writing five series of the BBC sitcom ‘Cuckoo’, and having plays produced by the RSC, the National Theatre and the Royal Court.

This is beautifully foggy minimalism with a caressing laid-back samba-like groove. For Robin, it is reflective of a transitional theme: chiefly in between two cultures and two cities.

A conglomeration of a Sandy Denny-like lull with a nod to the slow breeziness of Nick Drake’s ‘Hazey Jane 1’. It seems to pay homage to the cinematic restlessness of 60s sirens, Julie Christie and Rita Tushingham, whose respective character-portrayals yearned to break away from their small towns. Their contemporaneous male equivalent was depicted in a B-side by the very young David Bowie, ‘The London Boys’.

In the idyllic days of pre-lockdown, it is easy to reminisce. Escape back then - over the recent decades - was only a whistle-stop away, but now it is a more of a never-ending full circle than ever before.

‘Midland Girls’ is the latest in a succession of singles - leading up to the debut Sugarcane album in Spring 2021.