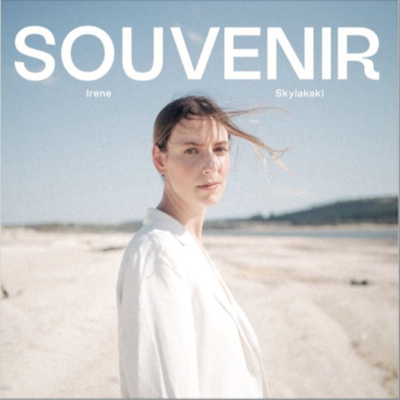 Irene Skylakaki, the ethereal, Grecian, alt-folk songstress returns to the airwaves with her latest offering, the angelic and haunting sounds of her fourth studio album, 'Souvenir'.

The album follows on from previously released singles ‘Sutherland Avenue’, ‘Dreamy’ and ‘Mary Smiles’, all of which were released this year and received a warm and welcomed response from existing fans and press alike. Judging by her experience and the trajectory Irene has been on in 2020 alone, her album is set to be a resounding success, calling upon her penchant for intimate songwriting and spacious, experimental production for the ultimate impact.

Nine songs long, 'Souvenir' is a highly experimental musical journey through vast and varied soundscapes and subject matters, almost as if it was an insight into Irene’s deepest thoughts and mental meanderings. A sense of closeness to her is felt when listening to the project, which is highly unusual, most albums foster a sense of escapism, a route out of and away from day-to-day life but 'Souvenir’s' uniqueness lies in how ordinary it is. Irene speaks of trips down the high-street, hand-in-hand with her crush, living in the shadow of others and even the joys of being confined in a tiny London room with her lover.

Yet, despite the rather pedestrian subject matter, 'Souvenir' is far from a boring or predictable album. Her lyrics are beautifully poetic, considered and relatable, whilst the production ebbs and flows between heavier, electronically enhanced sounds ('Hallucination') and more minimalistic, acoustic set-ups ('The Animal'). Track-by-track, each song on 'Souvenir' is wonderfully unique and wholly original.

Irene admits that the album lacks homogeneity in sound but makes up for this through the sheer quality and care applied to each song, each with their own unique story and soundscape making 'Souvenir' more of an audio anthology than an album, but a beautiful one nonetheless.