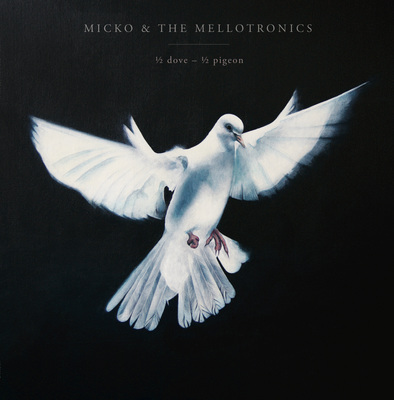 Well, it is here at last. The waiting is over. Since the spring lockdown, there have been a series of countdown single releases (‘Noisy Neighbours’, ‘You Killed My Father’, ‘Imelda’, ‘Psychedelic Shirt’) by Micko and the Mellotronics to prepare their fans for their debut album ‘1/2 Dove - 1/2 Pigeon’. A sense of additional Englishness is enriched throughout by their supporting players: musicians Terry Edwards and Neil Innes, as well as actors Paul Putner and Susy Kane.

Their sound? All about the riff! And those vocals! Micko’s reedy Yorkshire vowels certainly take centre stage. Their influences are worn unashamedly on their sleeves: early Supergrass crossed with either XTC or the Jam, along with Pere Ubu and Young Marble Giants being the icing on the cake.

Formed by frontman Micko Westmoreland. The Mellotronics - who started off as a three piece - have been a fixture on the London live circuit since 2017. Rock royalty kudos beckoned with the addition of lead guitarist Jon Klein - a true veteran of the UK punk/goth scene, with a CV stretching back decades. He is noted for his work with Specimen and Siouxsie and the Banshees, and played on the albums: ‘Peepshow’, ‘Superstition’, and ‘The Rapture’. The current line-up also consists of Vicky Carroll on bass guitar and founder member Nick Mackay on drums, and songwriter Micko on rhythm guitar and vocals.

Micko first burst onto our screens back in 1998, as an actor playing the non-speaking ‘Jack Fairy’ in Todd Haynes’ film ‘Velvet Goldmine’: a human personification of Brian Eno ambience. The film was about the volatile relationship of fictitious ‘70s glam rockers Brian Slade (Jonathan Rhys Meyers) Curt Wild (Ewan McGregor) - respectively based on Bowie and Iggy.

Primarily a musician, after the film’s release, he went on to release three albums of electronicana and eventually a song-based one called ‘Yours Etc Abc’ (2015) containing future Mellotronics songs in the making (‘Schmescos’, ‘Freaksville’, ‘Casting Couch’).

The album’s opener ‘Noisy Neighbours’ strikes more than just a literal chord. At gigs, it has been introduced as “about living in a housing co-op”. A bygone era era entirely. Now that lockdown two is over, the overall confusion still means that staying in is the new going out.

The perennial sense of landlocked-ness continues as an overall theme with their debut single ‘The Finger’. From the Mellotronics’ early days of performing; it is bolstered by a rubbery bass-line c/o former-Special Horace Panter. Depicted brilliantly in the YouTube Video by Paul Putner (‘Little Britain’). It is all about a solo drinker who is loath to leave his own comfort zone and heaven help anyone who challenges him. His territory is clearly marked!

‘Psychedelic Shirt’ is a TARDIS journey to early ‘80s Leeds. It alludes to ‘an incident’ when the young Micko was singled out for wearing the wrong clobber i.e. said shirt bought at Leeds market, by casuals wearing the pre-requisite golfing threads. Historically and culturally poignant, and somewhat ironic as well, considering anything ‘hippie’ was anathema. However, fashion victim Paul Weller wrote velvety paeans ‘Liza Radley’ and ‘Tales From The Riverbank’. Such a mindset underwent a shift a few short years later with the ‘Paisley Underground’ movement in the US and the latent beginnings of rave culture in the UK.

‘Imelda’ and ‘Good Friend’ are rife with vitriol. The former - a live fave - festers with backwards-guitar, and boils with castigating lyrics, which lash out at the still-living Ms Marcos’s labyrinth of a wardrobe: an analogy for her excessive deviousness - also shared by a certain ‘80s ‘Grange Hill’ character namesake. And of course, a certain bunch of Liverpool lads’ inadvertent snub of her gets a mention. The latter song is like ‘Romeo And Juliet’ distorted. Accusatory in a Peter Perrett fashion; it rolls off the tongue, and is poetically plain-spoken to the core.

Micko’s former ambient schooling is put into great use with ‘The Fear’ which evokes an overcast 3pm vibe of a provincial funfair. But a change of tack is distinctly felt with ‘You Killed My Father’ marking a sudden departure: a moment of reflection implicitly in the stalwart surroundings of a Working Men’s Club. Swirling arpeggiated guitar is gradually sidelined to let loose, Nick Mackay’s Bonham-like drum rolls. ‘Father’ is more akin to the exuberance of a Kiss concert. It contains piano flourishes and a psychedelic string arrangement courtesy of Neil Innes (formerly of The Bonzo Dog Band, The Rutles) who died in December 2019.

The NYC-centric ‘Halycon Days’ has a pivotal CBGB’s Bowery sheen. Intense Johnny Ramone downstrokes promise head-shaking monitor-grabbing euphoria. I have yet to see a list devoted to ‘Best British Rock Songs About The Big Apple’. But when it does appear, ‘Halycon Days’ will take pride of place with the Pistols’ ‘New York’ and ‘Back In NYC’ by Genesis.

The Mellotronics will no doubt be synonymous with the live music Renaissance once the pandemic is over, making this album even more enticing. Re-live your moshing chin-stroking youth, why don’t you? The eloquent advertising of actor and comedian Kevin Eldon, simply cannot be beat:

“Micko and the Mellotronics' deliver a nice hard punky punch that it's best to turn up the volume on. I like a catchy tune and a memorable lyric and that's why M and the Ms and Freddie and the Dreamers are my go-to leg exercise play faves.”