VELVET SHAKES Send Us To Space With Sensational Single 'World' 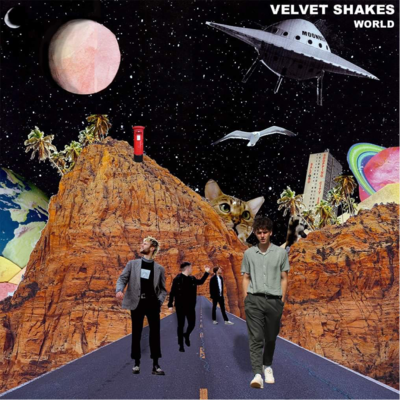 VELVET SHAKES are back with their funky fresh single ‘World’. Taking inspiration from a phrase overheard on the street, the four-piece group have sculpted a synth-soaked single set to lift your spirits this cold season. Made up of Josh Bithell, Scott Hill, Louie Donnelly and Anthony Hickey, VELVET SHAKES are the up and coming musical project making boy bands cool again. Despite having only formed back in June 2018, the Manchester based group and their genre transcending sound have wasted no time in establishing themselves amongst the city’s infamous music scene. Having ended 2019 with packed out support slot with Crazy P at Manchester’s Gorilla, VELVET SHAKES were set to soar in 2020 with their newly reinvigorated, high energy, charisma filled live show. Yet, VELVET SHAKES continue to build on their immense momentum with the release of a string of singles set to put them on a path for total airwave domination.

‘World’ is a vibrant new release from VELVET SHAKES. Sculpted on a sonic landscape of stunning synth lines and the grooviest bass line I’ve encountered in a while, ‘World’ is a complex chaos of musical magic. Josh Bithell’s vocals sail over this synth-infested bed as Scott Hill’s graceful guitar melodies swim amongst the mix with style. Evoking the funk of ‘80s house, the driving drum line launches the track into a deep-house atmosphere - and I love it. The narrative of ‘World’ speaks on the necessity for appreciation for the world we are so lucky to have planted on. Whilst right now it just isn’t possible to ‘walk’ around the world in the same manner as the track exalts, it’s no doubt, one day, VELVET SHAKES will be taking their tracks all around the globe.