Ambivalence (For You) (Single) 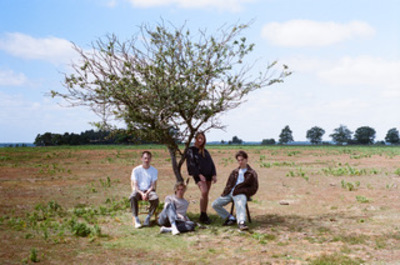 Ambivalence (For You) (Single)

If there’s anything we need right now to get our spirits lifted this cold season, it’s another ambient anthem from China Bamboo. Their recent release ‘Ambivalence (For You)’ is oozing a confidence and self-assured nature from such a group of young creatives. The four-piece group, based in Brighton, are currently making their mark in the rising stars category as they enlighten us all on their unique brand of ‘bubblegum goth’ pop. The enticing tones of lead singer Ruby are a stand out element in the mix of China Bamboo’s musical magic. This latest single comes off the back of their divine debut hit ‘We’ve Disconnected,’ an energetic hit radiating all the excitement of young creatives kick starting their musical venture.

Their recent release ‘Ambivalence (For You)’ is an expertly crafted four minutes of atmospheric indie bliss. With stunning, spacious synths and guitar lines that cascade like waterfalls, ‘Ambivalence (For You)’ showcases exactly why China Bamboo are such a hot act to watch this year. Drawing influence from Kate Bush’ Running Up That Hill (Deal With God) lead guitarist Danny wanted to give the song a renewed feel citing the importance of resonating chords captivating the emotion of the song when he stumbled on the forgotten poem years after its’ conception. Well, Danny did just that. The immense space China Bamboo masterfully creates in the mix flows Ruby’s vocals to sail through, emphasising the resonating emotion throughout. ‘Ambivalence (For You)’ has taken over our daily soundtrack of late, and we love it. Whilst Ruby may be questioning the authenticity of her emotions during ‘Ambivalence (For You),’ we’re certainly not unsure on our love for China Bamboo.