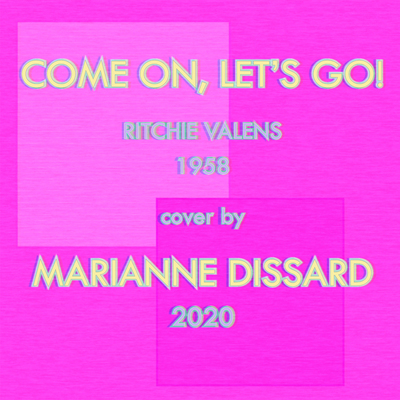 Cover versions can be a tricky business to say the least. Too many of them are unoriginal choices executed with far too much reverence to the original, while others go too far the other way and lose all connection with the song's source.

Marianne Dissard has, however, got the balance just about right on this, the latest in a series of covers she's been releasing over the pandemic, eventually to emerge as an album sometime next year. She's definitely kept an element of the pure rock 'n' roll that 50s icon Richie Valens was all about, but here it materialises in a more brooding and dark-edged form. Imagine, perhaps, the difference between "Grease" and Marlon Brando and his motorcycle gang rocking up in "The Wild One" and you'll know what we mean.

Oh, here's the other thing - while we know a lot of 50s and early 60s music is all about sex, this reworking absolutely reeks of the stuff. It's in the slow motion sonic frottage of the music, for sure, the strip club saxophone in particular, but mainly in the pause-filled, no bones seduction of Dissard's own singing.

Phew, as they say in the tabloid world, what a scorcher. Can't wait to see what she comes up with next, but in the meantime you'll have excuse us - we're off for a badly needed ice cold shower!

You can listen to it here:
https://soundcloud.com/mariannedissard/come-on-lets-go-ritchie-valens-cover-by-marianne-dissard