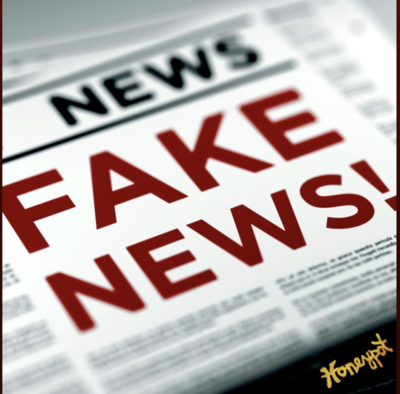 “Fake News” is an indie rock anthem about the state of the American government. Written by Honeypot, the self proclaimed “Indie Prog Rock” band from Charleston, SC, this song takes a real yet comedic look at the previous President and his attacks on the free press throughout his presidency. Honeypot wrote this song over two years ago, yet in the current chaos at the end of the Trump Presidency has decided to release it now.

A strong introduction from Jeb Bush referring to Donald Trump as a “Jerk” kicks off this anti-Trump track. Doubled vocals instil the chorus from the beginning, mockingly chanting “Fake news” followed up with the correlation “Isn’t that what the Germans said about the Jews?” proposing how dangerous it really is for the President to be making such outrageous claims. Reverberant lead guitars and almost punk guitars and drums make the chorus catchy and memorable. Strings in the background and the overall feeling of the song rings similar to bands like Ra Ra Riot and Two Door Cinema Club. This truly is an indie pop/rock protest anthem.

Speaking from Trump’s point of view for the verses, Honeypot makes satirical comments about Hillary Clinton, Ted Cruz and Steve Bannon. The music video is filled with clips comparing Donald Trump to Hitler, his meetings with Putin, his allies facing criminal charges and his several false claims about the press, as well as several clips mocking the other politicians mentioned throughout the song. Honeypot released this track on January 1st, 2021 with the statement “Fake News" is an indie rock song denouncing the hypocrisy of Trump's attacks against journalism. It was written in 2018, but now that 2020 and the presidential reign are ending, it seems the perfect send-off to both.”

“Fake News” is the perfect derisive way to send off the craziness that has accumulated throughout the Trump presidency, and definitely speaks to a large majority of the American people. I can’t wait to hear more from Honeypot in the future and see how they continue to make their mark on the world of indie rock.