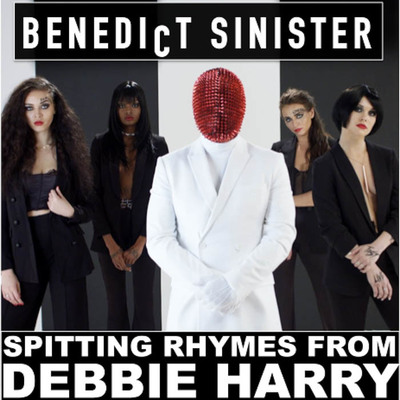 The 'anonymous' masked artist that is Benedict Sinister returns with edgy, punked up, new single, 'Spitting Rhymes From Debbie Harry’.

With Sinister it's wise to expect the unexpected. His provocative, boundary-smashing, genre defying, punk rock creation crashes onwards, taking our minds on a drug fuelled, break-neck, twisty-turn-y, bob sleigh ride into oblivion. My mind frantically illustrates the track with little Hunter S Thompson cartoons in my head as I listen.

A homage to Harry, the song includes a quote from her recently published autobiography as well as quoting rhyming couplets from Rapture alongside other Blondie and Harry solo hits, an approach Sinister also previously employed with Bryan Ferry lyrics. Additionally, there is the shocking line, “When I was dealing with depression / There was nothing better than heroin". There are no boundaries he's unwilling to push, it seems. You get the strong impression even if they wanted to, that no one could shut up Benedict Sinister and therein lies his artistic strength. This poet, singer/songwriter and producer’s music and art are tightly entwinned, his hoarse vocal is distinct and deliberate.

Musically he’s headed somewhere between Minty, Lydia Lunch and the Sex Pistols, but could veer off in any direction at any time. Sinister is spitting out something more punk rock than Johnny Rotten, which once heard will leave its own unique & indelible mark. Intriguing? Provocative? Unpredictable? One could say all three. Have a listen yourself and decide.