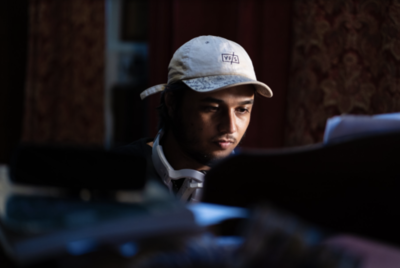 A jack of many trades and master of some, 25-year-old Filipino-American artist Nathanael Philip Mosher is one of a kind. His lifelong love for writing has led him from poetry to stand-up comedy, music, and spoken-word poetry. Nathan began writing poetry at age seven. At age ten, he was chosen by his fifth grade teacher to enter the Young Storytellers program, where his play about a man becoming king of the Martians was acted by “Phil of The Future” star Ricky Ullman. While attending UCLA, he studied English literature and Creative Writing, while taking advantage of the burgeoning comedy scene, running shows in lecture halls, theatres, coffee shops, classrooms, and even parking lots, continuing to perform nightly in the greater LA area. After a life changing mental breakdown in 2018, Nathanael began to weave his poetry into song, honing his craft even further.

Nathanael developed his experiences into a one-man show entitled, “Nathan Mosher is Injured”, a compilation of jokes, stories, poems, and songs about a breakup, a breakdown, a breakthrough, and everything in between. The show includes some of the seedlings of his debut EP. Unfortunately, he was unable to debut the show at the Edinburgh Fringe Festival due to COVID, but Mosher decided to continue forward with the production of his debut EP.

After months of recording, producing, and writing remotely, Mosher worked together with mentor and engineer Tom Bajoras to create his first EP, self-titled NATHANAEL. The eclectic EP soundtracks the grieving process and celebrates the humanity of suffering. The EP is due out on all streaming platforms in late spring of 2021, with advance singles being released in the new year. Until then, Mosher continues to write, produce, and master new music, which will carry you into the New Year.