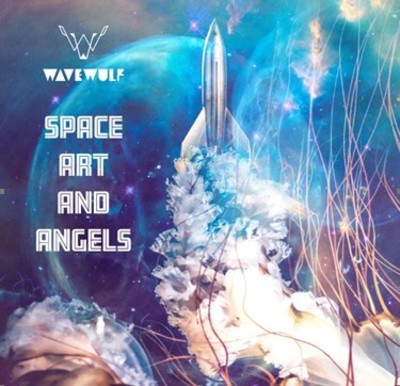 Nicholas Long from New Jersey - better known as synth wizard Wavewulf – had what he calls a Damascene conversion to electronic music when he saw Depeche Mode live. From that moment on he started building a collection of Korgs, Moogs and other analogue treasures, as well as turning his hand to using said synths to make exquisite music.

His latest album, Space Art and Angels is themed around ‘space, time and life’. You may not find that a particularly original concept for an electronica LP but, I have to say, there’s no doubting that the music it contains is not only highly individualistic, it’s also rather special.

For starters, it’s a crossroads of influences. It’s more mellow than techno but more lively than ambient. There are elements of the throbbing sequencers of electro and the headlong drive of Krautrock to the icy swathes of coldwave and synthpop. ‘Angels Playing’, for instance, with its wonderfully cheeky synthetic brass line, sounds like the theme to an optimistic 70s children’s science show that was lurking somewhere in your subconscious just waiting to be dredged up.

‘Streets of my Town’, meanwhile, sees guest vocalist Matt Jensen delivering a relatively rare vocal, sounding heartfelt among the cold technology, while ‘Aim For The Stars’ bubbles away with intricate perfection.