.Wavrunner Take You On A Frat Boy Road Trip With 'Joyride' 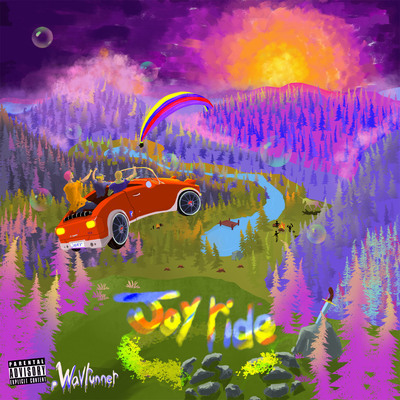 ‘Joyride’ is the follow up to their (equally) potty-mouthed humorous frat boy-esque single debut ‘uh huh, i like it’ and like its predecessor sees the boys indulge in all levels of lyrical playfulness, bad behaviour and filthy language to boot. Indeed on ‘Joyride’, the band continue to delight in casual profanity and mischievous ways; the video emphasises this and sees these bad boys on a naughty road trip in their ‘Jalapeno’ car looking for fun, frivolity, booze n ‘booty’ and on an endless quest to get high. (Imagine if The Beastie Boys had ungrateful grandkids who ran away from the naughty step, stole grandpa’s car keys and beers, rolling up a few spliffs whilst zooming out of the drive and giving you the finger- and you’re pretty much on the right page.)

However, the track is arguably more laid back than ‘uh huh’ and not as punchy or upbeat and so doesn’t lend itself as well to the ‘fun’ vibe they might have been going for. I guess in these serious times of disease and endless lockdowns this confident irreverent swagger can be, as with the previous single, refreshing and a bit of a light-hearted laugh. However, as we all crawl out of a long, long, LONG year of mopey isolation and misery and back into our normal lives they may find there IS such a thing as ‘too much’ froth, profanity and fun. The danger is to be seen as ‘one note’ or as a ‘one trick pony’. I hope not.

It will be interesting to see how their body of work evolves from here and what other musical tricks they have up their sleeve. Meanwhile, download this track if you feel like a smoke or a beer on your doorstep to forget the dark shenanigans in the world for a while.