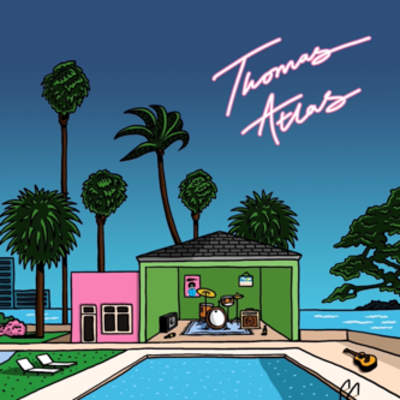 Funk musician, Thomas Atlas, is currently on flying form ahead of his new self-titled album due out later in April via Hillside Global. Luckily, I managed to review it ahead of the big day, and by heck, it does not disappoint!

Eleven tracks make up the whole album, and every track is a gripper. Furthermore, Thomas unleashes a powerful vocal which only he could pull off with his tones smashing down the industry barriers at every turn.

The album opens up with Thomas' highly acclaimed single, 'Got This Feeling'. From the opener, it is evident that every track will excite the senses, and it does just that! Moreover, it grows as it progresses with Thomas dropping vocal hooks, which are timeless. He is a funk machine, and his vocals match his band's prowess seamlessly.

As I get to 'Juice', the endorphins are almost brimming, and the energy flows like a water spout on a summers day. The brass instruments leap out with distinction, and it is the definition of 'saxxy'. But, the excitement does not stop there, with 'Turn Up The Heat' getting the ears burning with delight.

Democratic and a committed leader of his band, Thomas gives every musician the airtime they crave and the bass rips through on 'Paradise Circus'. Likewise, the guitar riffs fasten me in on every track, with them reaching the melting point within the closing tracks.

Overall, Thomas Atlas is the gem that can do no wrong. Funk album of the month? Easily.