Kitty, Daisy & Lewis Prove Why Three's Not Always A Crowd For "The Third"


It was 2011 when Kitty, Daisy and Lewis launched their last album and four years is a long time in music land. 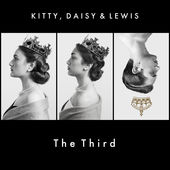 When the youthful trio splashed onto the scene their cover of ‘Goin’ Up the Country’ was the music sync choice in 2008, and having now reached their twenties you wonder if we’ll see some kind of change to the sibling’s direction.  They had their cool credibility at their inception, entertaining the likes of David Lynch and Dustin Hoffman at shows when they were little more than teenagers. Yet the Durham family don’t seem to have short circuited, shaved their hair off, demanded a year’s supply of milk duds or hung out with Madonna.


This third album was produced by ex-Clash Mick Jones in an old Indian restaurant in Camden now transformed into a studio – a big step up from their mum’s spare room. It’s a studio that can only hope to contain the plethora of instruments the trio can play, amplified by their musical family (Mum has been known to lend a hand having been in ‘70s band The Raincoats).


There’s some good and some not-so-good to the album, yet despite some low points the album is likable, and that’s because of something that those downloading one-off singles will miss out on; the general mood created by the album of nostalgia, innocence and quirk. You want to replicate it, its casualness. You feel they rocked up and jammed. And maybe they did.


The duffers aren't numerous - ‘Feeling of Wonder’ doesn't make much of an impact, and  while ‘No Action’s ‘oh oh oh ohs’ flattened by a funk ‘70s guitar riff make it stand out, the rest of the song is a little lacklustre.


There’s a huge variety of exploration of styles here however which forgives this. The charmingly friendly ska of ‘Baby Bye Bye’ is contrasted by ‘Good Looking Woman‘, a great track with a deep south swagger backed by horns for depth to its rockabilly vibes. ‘Turkish Delight’ is another high point, layers of sound creating an upbeat ska track echoing the summer that is far off. ‘It Ain’t Your’ evokes elements of country with a harmonica and guitar dancing between each other while ‘Ain’t Always Better’ again has that confidence, that Doc Martin bravado that the album thrives on.


‘Whiskey’s rolling declaration to “take you home” is an anthem waiting to happen for night time revelers, soporific and lethargic. Its bound to pervade a few Shoreditch dives. Just goes to shows that three’s not always a crowd.