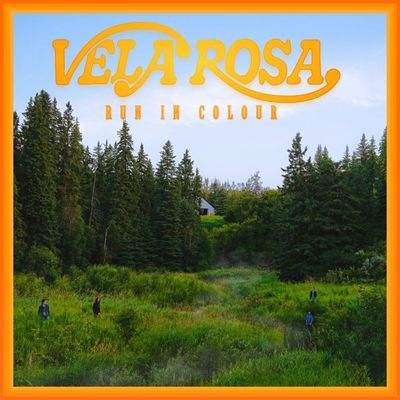 Vela Rose, an Edmondton, Alberta band just released their first album called Run in Colour. This modern rock band is changing the name of rock and roll, with sounds of the 80’s and 90’s with a modern twist. While they sound old and wise, they are actually 20 years old. Their youth and connection to the present is what makes their music so unique and something you won’t hear anywhere else.

The entire album is a story about journeying. It starts with a song called “Run in Colour…” which is a minute of instrumentation. It fades in, followed by an echoing guitar, and fades out. It’s followed by “Feel It,” a slow yet upbeat song about people. They sing “We come from a place you know without a name,” saying we all come from somewhere which is nameless to someone else. You then get “All we Need” which sounds more like a modern day Beatles song, about living your best life. They sing “sing and dance away our chances, that’s all we need.” “For My Love” comes next, with a 90’s rock and Barenaked Ladies vibe to it. It’s fun, fast, and gets your head bobbing.

The next few songs, “Gone and Rollin’,” “Eulogy (For Those Left Waiting),” “Right in Front of Me,” “Tellin’ You,” and “Angel” all start unexpectedly slow. It’s not what you expect from rock. They are slow throughout, but boast catchy beats. Each not lyrically heavy and lean more on funky and strong instrumentation. “Ariadne” is different as it is purely music. There are no lyrics. You listen to the band as one with music. It takes you back to old school, 1970’s guitar solos. It picks up again with “The Dealer” with a modern rock sound. It’s fast paced beat makes you move your body. It boasts of guitar solos and moving vocals.

The album wraps up with “...Out of the Grey,” the cathartic ending to “Run in Colour…” and “Hey Yeah,” which is what a classic rock song sounds like, to leave you feeling good and rounds out the story. By the time you finish the album, you’ve been placed in a musical coma, something no other rock band will do. Vela Rose wants you to think and feel through music, leading you through this journey with them.

The full album, Run In Colour, may just be an instant classic, and like all timeless musical statements, has an intriguing “Behind the Music” story. For starters, the band’s producer was a polarizing individual who employed questionable technical and interpersonal tactics. With one week to go, the band was informed there was a “suspicious activity” alert filed by the studio and they weren’t allowed to go back inside. When they did investigate, they found the studio was behind on its rent and that $40,000 of the band’s gear was seized as collateral against the lax payments. The band pursued getting their equipment back, and was eventually able to retrieve their gear but Vela Rosa had to finish recording in a makeshift studio in Wyatt’s parent’s basement. The anger and frustration of this arduous trek definitely comes out in the aggressive and emotive album performances. Run In Colour captures a moment in time, framing a world-class new band stepping forward; documenting a nightmare album-making process, and snapshotting 20-somethings growing up.