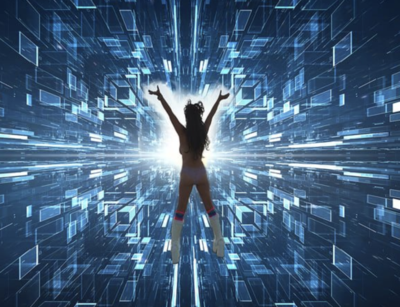 Star Goes Nova rockets everyone to a futuristic dance rave with her latest release. City of Angels is a space station that is the fantastical pleasure dome of legend. The actual Falcon 9 rocket launch roars us into the midst of a polyrhythmic people whose diversity is celebrated through dubstep drums, intricate instrument layers and chanting. Well known on the Southern California scene as a bassist, Christine Law transformed herself as sound engineer and multi-instrumentalist Star Goes Nova. Working with Grammy producer John Baffa, Star Goes Nova combines real instruments with electronica and dubstep bass and drums to create epics that are beautiful and powerful. Star Goes Nova melds backgrounds of hardcore bands and orchestra into diverse sonic landscapes and often incorporates the sounds of space. Star Goes Nova is an instrumental artist who deeply breathes in universal human experiences and breathes out sound waves that reverberate through all beings. Her intricate music and technicolor visualizers ignite the senses and energize the soul.

With emerging sounds similar to that of The Glitch Mob and other technological superstars, unique electrifying sounds take over in “City of Angels”. Epic fantasy immediately fills your senses and takes you to the stars. Deep grime bass and masterful instrumentalism dance around you, and you won’t want to walk away. As you listen a sense of electric power combines with explorative escapism to transcend past the current moment. Cinematic and made perfectly for the next intergalactic rave, Star Goes Nova shot past the moon with “City of Angels”.

The famed Christine Law’s multi-genre expertise shines through her latest release. Fascinating use of a plethora of instruments forms an audio experience meant to grace the vastness of the galaxy. With specialized legendary audio of the Falcon 9 launch, listeners will feel as though they belong among the Milky Way in an EDM dream.

Whether listening intently to the intricacies beautifully layered into each moment of the track or enjoying the highlighted and surreal frontliners - “City of Angels” is certainly that. Audiences of all backgrounds will find themselves looking to board the next flight Star Goes Nova takes them on with eager anticipation. A voyage that will be unquestionably filled with sonic rhythm and exciting dubstep drums to enchant and entertain amongst the cosmos.