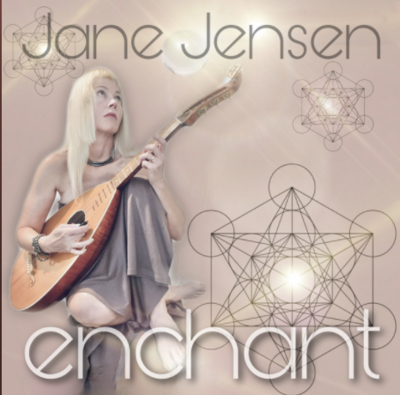 Jane Jensen is an award-winning singer/songwriter with an impressive career and catalogue. She's had her music released through Interscope, Fiction UK, and many others including her own label, Autozen Music. You may even recognize her music as some have been featured in many film and TV shows such as The Good Wife, Slither by Universal Pictures, MTV and more, and is currently working as a songwriter for FOX Entertainment TV. Recently, Jane has also been focusing on her own music by constantly evolving and changing as an artist, producer and songwriter. Her new album, Enchant, is a pivot from her previous work with meditative influence. It was written as a way to cope with the chaos of the pandemic, to mentally heal. She incorporates Sanskrit, Aramaic, Tamil, and Hebrew because, for her, they are “languages that have no distracting emotional baggage.” They allow the listener to become easily enchanted. The whole album itself can only be described as a spiritual aural experience and is an interesting experimental approach to music. It’s completely and utterly unique and takes you out of reality. Once you start you'll want to listen over and over.

Every song on this album does exactly what the title promises; it enchants you. It engulfs you into this state of relaxation and instantly escape from the world around you. Her use of repetition in each song on this album, both in lyrics and music, takes you into a space you never knew you could reach. Her song, It’s You I Love, repeats the phrase “My love is…” almost making you implicit in the song. You realize for yourself, “yes, my love is…” but you’re simultaneously aware of what the artist has to say. Jane puts it like this, “It sounds something like if Cinderella did some shrooms at the ball and landed over the rainbow.” It’s brilliant songwriting.

Her next handful of songs are written specifically to put you in a calming state. Atha, Talitha Kum, Bodhi Tree, and Tikkun Olam have a slow beat and entrancing music brought together by her repetitive lyrics, which is the name of the song. Before you know it, you’ve listened to the whole album, as these songs take your consciousness and sweeps it away. Where It’s You I Love is more poetic, these four songs are spiritual and meditative.

I wish I had this album during the pandemic. I can honestly say that I listened to it multiple times and each time my stress went away. My brain was turned off for the first time in ages. I was moved to just chant along with her, to move to the music ever so slightly, and to just sit in the space that she created. To be able to use music to create an experience is magical and she is able to do it flawlessly. She made me feel so alive. Her music was so moving and powerful, exactly what music should be.

There is nothing else like this album out there. It’s completely her own. She takes you on a magical journey and the listener becomes a willing participant. Jane’s purpose of this particular album was all about healing.