Rave In My Bedroom (EP)

Kingdumb Gets The Head Bopping With 'Rave In My Bedroom' 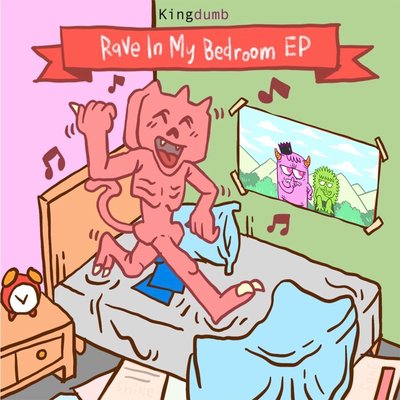 Rave In My Bedroom (EP)

Kingdumb gives the world an indication of how he spent his lockdown with his new release, 'Rave in My Bedroom'. Furthermore, based on the style of his EP and the vibe he conveys through his new songs, it looks like he has been raving in his bedroom for quite some time. What a legendary figure! Is there anything else I can say? Yes, of course.

With this new small collection, the producer is on fire, and the EP, which consists of four tracks, provides the ears with the feel-good energy boost they've been needing. Furthermore, given the absence of energetic activity in the previous year, this new banger couldn't have come at a better moment, and just in time for the lockdown easing even more.

The EP's first track, which has the same name as the EP, is instantly euphonic. Furthermore, it reintroduces the youth culture vibe that was popular in the 1990s and early 2000s. Also, it does not seem to blend in with modern days, yet it still has a place at the party. We've been missing it!

'Click Click CLack,' from the EP, is also a rich jewel that deserves mention. It's a departure from the opener, probing deeper into the hip hop genre with a stunning vocal performance from Swindon-based music producer and performer. Also, the EP's other two tracks, 'Brown Skin Solider' and 'Kill Very Many,' are show stoppers, and they help make the EP what it is!