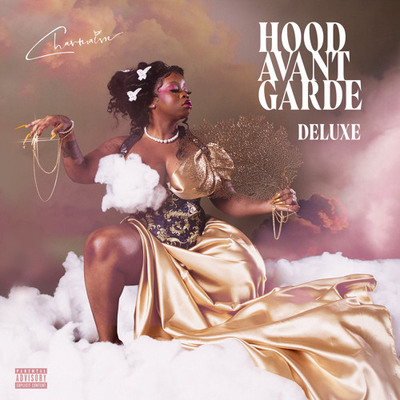 While I slightly slept on Charmaine's original EP output, I'm surely not going to make that same mistake again, and so here's the Toronto name's Hood Avant-Garde Deluxe EP.

First time around, Charmaine flexed her easy ability to spit a hip-hop verse and sing in a melodious R&B style, and that's still true to her deluxe version, but with additional heat from guest artists Haviah Mighty, Valentino and Kali. The Canadian up-and-comer arrives hard on first track 'WE DON'T CARE' with its heavy dub aesthetic before flipping it more old-school on 'WOO!' - these two are fairly similarly, putting forward Charmaine's indomitable confidence.

Third on the EP is 'A Mi Manera', the one and only Latin-influenced track which goes heavy on the Spanish rhythms as well as showing off a softer, but still sexy as hell, side to Charmaine. With close to 2 million streams, next is fan favorite 'BOLD' which primes the listener (and probably dancer by this point) for the extra saucy 'SIZZLE' with its cool, minimalist beats that barely bring down the heat from Charmaine's performance. Next is probably to most fun and playful track on the Canadian's roster - 'Double Dutch' - which has some high-renaissance Missy Elliot vibes in its music video. We end up on 'SMH' which is all about Charmaine's bossy'n'bold attitude with chunky contemporary beats and tons of energy!

To be honest, the whole EP has a mountain of energy and if you could bottle it up, Charmaine would be putting Red Bull out of business.