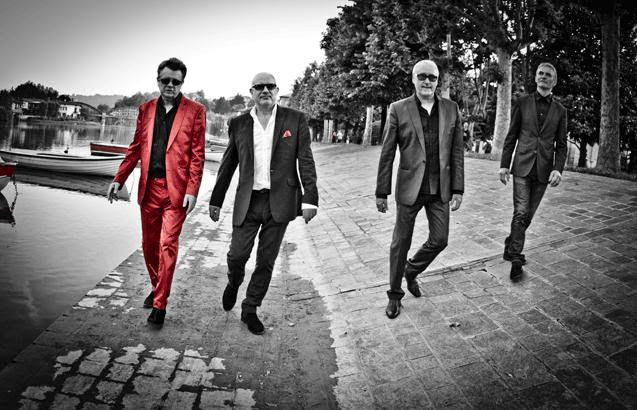 The history of rock music is littered with bands who fail to translate legendary live reputations into record sales. Some will claim for example that in concert The Big Three were second only to The Beatles on the Liverpool scene, but you’ll never know that from their limited and frankly downright poor studio output.  There are many reasons why artists struggle to make the leap, from wrong place, wrong time to a lack of charisma or decent original material and plain bad luck. To be honest, Nine Below Zero suffered a little from all of the above, but that doesn’t stop these reissues from the early 80’s being worth your time. Following the example set by Dr. Feelgood’s Stupidity, A&M decided that the best way to launch Nine Below Zero to a wider public was via a live album and as such
Live at the Marquee, their debut,
arrived in 1980 to set out the bands Alexis Korner endorsed stall. Coupling an authentic blues sound with a dash of punk energy, strong musical chops and mean harp playing it was well received but failed to chart. Already released as part of this reissue campaign (including a DVD of the gig) it remains an essential purchase for any fan of the British Blues scene. Now available in similarly comprehensive reissues are the band’s first two studio albums
Don’t Point Your Finger and
Third Degree. The first of these is probably the pick of the pair but if you like what Nine Below Zero do you won’t be disappointed by either of them. Littered with great performances these albums are never less than enjoyable even if you’re left with the sneaking suspicion that they really would be better experienced live. Both reissues go some way to addressing that as
Don’t Point… includes a first rate live gig on the second disc and
Third Degree offers an alternate and rawer first attempt at the album, produced by Glyn Johns which is previously unreleased. These releases have been carefully handled by Universal and are wholeheartedly recommended to fans of the band. From this distance though it’s not difficult to see why they didn’t quite make it at the time, never really part of a ‘scene’, they lacked the charisma required to stand out from the crowd on their own terms. Having said that it’s equally easy to understand why bands like The Who or The Kinks chose them as a support act in the early 80s. If you want a band who can whip a crowd in to a frenzy without overshadowing the headliner it’s difficult to think of a better option. 30 years on Nine Below Zero continue to trade on that live reputation as recent concerts and their upcoming support slot on The Stranglers 40
th anniversary tour demonstrate. So pick these up by all means, but do yourself a favour and pick up some tickets to go and see them first.