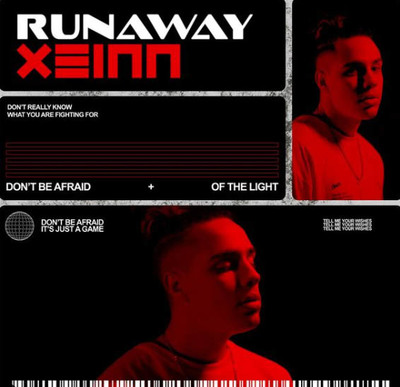 Madrid-based Alejandro Agudín Arribas, a.k.a. XEINN is an R&B/ trap/ hip hop-influenced artist who is clearly on the rise. His cover of “Changes” by XXXTENTACION, went nuclear a short while back apparently attracting an incredible 12 million views. Since then, he’s been writing his own original material and just dropped his debut album “Pride Of The Weak” (I’ll come to that in another upcoming review). Its lead single/video is the dark but vibey track “Runaway”.

XEINN is rumoured to be Inspired by The Weeknd and this shows in his well thought out production flourishes and thematical ideas. “Runaway” is a moody, well-paced song with a kind of simple ‘deep shadows’ video to match. The Boy can definitely sing and, if the video is anything to go by, this fledgling artist knows exactly the vibe and mood he needs to portray for his audience.

Similar to his hero, The Weeknd (particularly in the 2020 album “After Hours”), this artist has developed a theatrical concept: he clearly looks upon ‘XEINN’ as a character he portrays and the songs are about the experiences and reflections of this alter ago, which is an interesting perspective and something that is unusual for a young artist to explore.

XEINN’s vocals punctuating hooks serious with almost sinister electronic undertones which are very appealing to those of us who aren’t into cheery pop. It is very much in the ‘deep’ R&B / trap world but is arguably radio friendly for all that. I could easily imagine mainstream radio such as BBC Radio 1 picking this up for playlist, although maybe XEINN needs to raise his profile a bit before then to attract some industry ears.

This artist is clearly still in his formative creative phase but you can tell he is serious about what he does and is aiming high whilst putting in the hard work. Young. Ambitious. Creative. Interesting. I recommend you delve more into the world of XEINN and watch him grow.