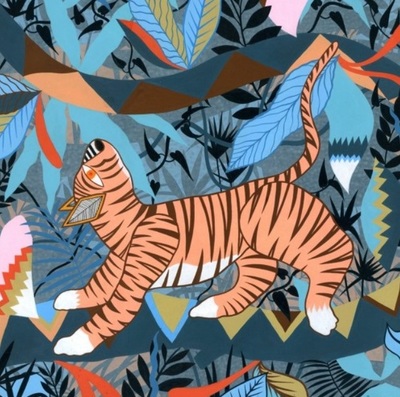 The weather in the UK this summer might be about as dependable as the proverbial chocolate teapot, but we do have one thing at our disposal that’s absolutely 100% guaranteed to bring some properly tropical sunshine into your life.

‘Cat’s Eyes’ is the debut album from a gang of musicians put together by their frontman, singer and guitarist Robin French. He grew up in Birmingham but caught the bossanova bug in his teenage years, initially identifying with the faces – they echoed his own mixed race heritage – as much as the music. On this 11-tracker he unveils a musical vision which interweaves the traditions of South America with songwriting influences from much closer to home. The results are unique but very natural sounding too.

The album opens with “One Specific Thing” with sometime co-vocalist Antonia Smith telling tales of heartbreak and car theft over a swaying, steel pan-augmented groove, setting the scene for the album’s bittersweet blend of joy and pain. French joins her on the duet “Clear Blue Sky” next, a more straight forward lilting love song, before taking over full duties on “Midlands Girls” and “Cat’s Eyes”, the first a story of migration and dashed dreams, the second seemingly about life’s regrets from the split second before impact in a car crash.
Which may not sound like a whole barrel of laughs, but there are plenty of moments of levity, not least recent single “Blondes Have More Fun”, which pokes fun at big name artists who’ve stolen from black music, and “Wide Sargassa Sea”s cartoonish story of voodoo and slave revolts. But it’s probably the more raw, self-revelatory lyrics that will linger in your consciousness longest, like “Bethnal Green Blues” (“I’m a selfish shit/just walk away… baby I’m bad news”) and closing heartbreaker “Night Owl”.

It’s full of familiarity, but not quite like anything you’ve ever heard before. One thing is for sure though - these “Cat’s Eyes” are the dog’s bollocks.