Vance Joy releases his debut Dream Your Life Away, but does the Australian singer inspire or tire through his first album? 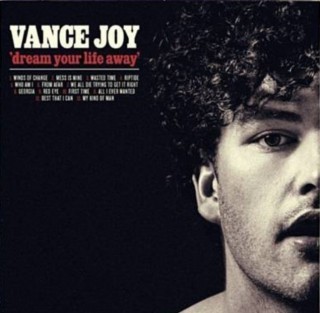 I must confess from the start of this review I've never really been a fan of the indie-folk genre that James Keogh, better known as Vance Joy, belongs to. I always feel more at home with crashing guitars and wailing vocals than ukulele inspired love songs. Nevertheless, inspired by a few drunken sing-alongs of “Riptide”, it seems that the man to change all that might be Vance Joy.


All in all, Dream Your Life Away is a really pleasant album. It’s incredibly easy to listen to and will definitely be the backing track to many a chilled night in around the world. The first thing which should be said is that it does NOT revolve around "Riptide". Yes it is the big hit of the album, but alongside stripped-back tracks such as "Georgia", it seems over-produced and predictable. "First Time" is almost a spitting image of "Riptide" and a few of his other hits seem to follow a similar pattern.


However, dig deep into the album and I promise you, you will be rewarded. "Red Eye" in particular is a real work of art; with a catchy riff and an excellent flow, perhaps it should have been released as a single instead of "First Time". The other single together with "Riptide", "Mess is Mine" should have featured in the UK charts. The tension in the song builds excellently with a very catchy riff, alongside some sickeningly cute lyrics which would go down brilliantly with teenage girls.


Despite being based in the vague genre of indie-folk, Vance Joy manages to do what very few similar artists have achieved in a debut album. He has a set style, but similarly he creates three or four different sounds across the album, mainly done through varying the style of guitar pattern he creates.


Without getting too technical, the aforementioned "Mess is Mine" has a riff which would not be out of place on Charlie Simpson’s excellent album Young Pilgrim, whereas "From Afar" reminds me of the talented Frank Turner but without his powerful vocals. Not only this, but his songs move from the happy (Who am I) to the contemplative (All I ever wanted) then to the sad (My Kind Of Man) with ease.


Having said all that, I'm not going to buy this album. For me, it falls into the same trap as other indie-folk artists. The album’s slow tempo and laid back attitude just doesn’t tickle my fancy. The album is pleasant, but nothing more; it just does not excite me. To put this into perspective, I have only bought two albums over the last year that I would consider outside my genre of music: Avicii’s True and Ed Sheeran’s X, both of which are fantastic albums in their own right. Dream Your Life Away, though a fine debut, is not of this standard.


However, you probably do not have the same taste in music as I do. If you occasionally tune in BBC Radio 1, Heart, or any other mainstream station then I would urge you to buy this album. Regrettably for me, I simply don’t enjoy it enough. But that doesn’t mean you won’t.