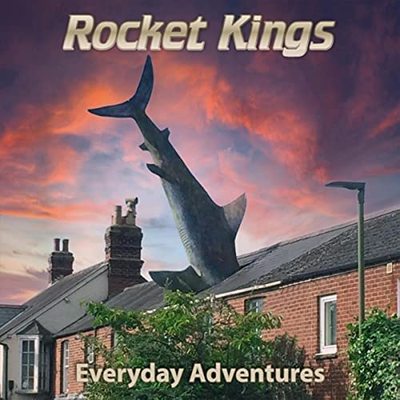 Seconds into 'Everyday Adventures', the debut album by 'Rocket Kings', one is rendered utterly helpless in an inevitable, involuntary spasm of coordinated (or otherwise) dance movement. That may or may not be an exaggeration but I honestly doubt there are many amongst us with a happy disposition who would not at the very least tap their feet or sway their hips to the chorus of 'Rendezvous', the album’s wonderful opening track.

This five-piece band from Reading in England writes and performs its own music and has presented us with a collection of songs that is diverse in style and mood yet consistent to a certain pop tradition wholly committed to the required levels of melody and optimism. I am in two minds whether to mention so soon in our story that with the exception of the bass, the only stringed instrument you will hear on 'Everyday Adventures' is that curious little beast, the ukulele. The band’s trio of singers, Dave Stewart (not the one from 'Eurythmics'), Bex Crossland and Jess Tuthill all play the ukulele but if anybody is concerned about the range and richness of such a diminutive machine, let me assure them otherwise. It was certainly news to me that it can be enhanced by a plethora of effects and so on my first listen, I was quite sure the songs were being beefed up by electric guitars. Not so. They have been entirely usurped by their upstart little brother.

Now that’s out the way, let us proceed to the songs themselves and see how they hold up in the clear light of day. Truthfully, this is where the album shines. As one progresses through the tracks, one encounters tune after finely constructed tune. They sound as if they made their way seamlessly into the brain of Stewart, the band’s song-writer, where they were met with love and attention. Most of the tracks are extremely catchy. In many of them, the lead vocals switch from male to female and back again and then combine together in harmony at the perfect moments. Thanks to the tasteful drums and bass provided by David Heath and Greg Forys the tunes are full, powerful, rich and deep. We’re given a full, rock-pop band sound but without over-shadowing the simplicity of the melodies. There are faster songs that swing and there are slower songs full of serenity that touch the soul. One often feels as if one is drifting through an open field of wild flowers on a summer day, chasing butterflies one moment and lying in the long grass the next. There is a great Englishness about many of these songs too but there is never a descent into blandness and narrow parochialism. In all honesty, there are many great tracks here and if handled intelligently, I believe there must be a decent chance of a hit or three.

The sequence of the songs is very smooth too and so the whole album flows as naturally as an ancient river. My favourites are numerous and I feel disappointed to omit some of them but I’m inclined to term the following as “stand-outs”. 'When The Time Comes' is a love song that gently opens with a lone acoustic ukulele before Stewart joins to sing the first verse. Crossland then sings the second verse beautifully, out and about on a quiet river stroll. She spies a Kingfisher and then the whole band enters for a chorus reminiscent of 'The Stone Roses'. The very next track, 'Space Camp' has a pulsating drum beat, a wah-wah sound effect from one of the ‘ukes’ (may I call you by your nickname?), an intrepid spirit and inter-galactic lyrics that turn outer space into an endless fun park. For some reason, 'Our Boat Will Come' brings real tears to my eyes. There’s a chord change near the end of the chorus that makes me want to gather every person I’ve ever met, pint in hand, within ordering distance from the bar and thrash up and down in a frenzy of love and reminiscence. Or I might sit on a tiny stool by myself, trying to spy the stage between the dancing bodies, grinning like an idiot at the triumphal uke riff that parades over most of the song like a beacon guiding us all back home again.

I have it on good authority that 'Rocket Kings' end their live show with the album’s final track, 'Tip Top Hip Hop Uke Pop', an anthemic ode to the band’s love affair with their genre which they term “uke-pop”. They sing tongue in cheek that “it doesn’t get better than this” and while that may not be completely true, this listener immediately re-played the album all over again, eager for another happy journey into the pop camaraderie of 'Rocket Kings'.