A World That Has Left You Unspoken 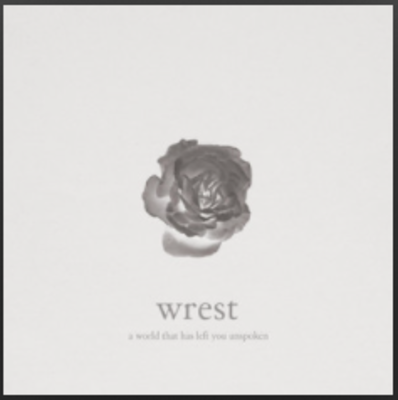 A World That Has Left You Unspoken

Every so often I try to keep my indie rock bona fides up by seeking out new music. Such was the case when stumbled across the Edinburgh based band Wrest. The quartet have release a full length record and now a new EP that are far and away the best things I have heard in forever.

Wrest wear their influences like buttons on a guitar strap. The most obvious comparison is Scottish favorite sons Frightened Rabbit. Like the FRabbits, Wrest build tension in the songs through subtle guitar textures playing against the crooning of a dynamic lead singer. Stewart Douglas deploys his Scottish accent to give the right amount of pain and despair that comes with the songs and yet finds seems to find hope on more than one occasion. “A Perfectly Spherical World” off the new EP starts out slowly and just ratchets up the mood without really allowing for a massive release. Where one would expect a massive drum break into a crescendo of a coda, Wrest opt for a slower reduction to leave the listener a little uneasy about the fate of our singer.

A song like “Blood” could be a spiritual successor to the Rabbits “Fast Blood” where Douglass even channels Scott Hutchison a bit without it turning into karaoke. The band seems to have been born fully formed with a production value that rivals the most seasoned of acts. One the first album, the band reuses guitar parts and melodies to make a singular statement. The new songs are more varied without straying to far from their signature sound. Synth lines wash around the mix like waves crashing ashore hinting at elements of The Twilight Sad. The lyrics of “Hello Indigo” seem to hint at lost love and the possibility that maybe that love can be rekindled some day. The listener can see the blue eyes, perhaps with tears welling inside them, that many of us have encountered from time to time. The ending of the song does give the release that has been beckoning for the entire suite of songs as Douglass tries to keep pace with the searing guitar of Stephen Whipp. The song melds into the next song, an acoustic rumination entitled “Universe Around You”, about one’s place in the world and what could be done if these loves reunited. In five short songs, the band has given us a complete story and taking us on a quite a journey.

I am confident Wrest are fast joining the pantheon of really amazing Scottish bands that have created a vibrant scene full of wide ranging acts. It is not hyberbole to say this, along with their first record, have been on repeat on my house for the better part of two weeks now. I can’t shake the way they create these beautiful tapestries of sound and image. I find myself turning the louder parts of the songs up on the radio and hoping that someday I will get to bellow out the lyrics I have already committed to memory in some small club here on the west coast. I want to be able to say I saw them before they hit it big, I want to be amongst the first to champion them to others.