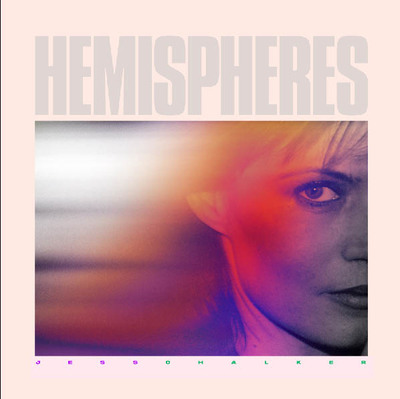 If you havent yet heard the honeyed and silky smooth vocals, not to mention the accomplished musical prowess of Aussie in London, Jess Chalker, let me educate you right now. Jess Chalker is a much sought after song writer who has worked with many seasoned musical professionals across the globe. Not only that, she’s a Grammy winning, Emmy nominated composer, having collaboratively written for Lisa Loeb and commissioned on her own to write music for key Amazon Prime TV shows. Why havent you heard of her yet? Very good question. Now seems to be her ‘time’ as she emerges as an artist in her own right, releasing her intensely personal new album ‘Hemispheres’.

Jess Chalker isn’t a pop artist who is all about cool image and idolatry, this is an artist who has the genuine musical artistry down pat: think of the creativity of Kate Bush, the lyricism of Stevie Nicks, the vocals of Florence and, maybe too, the occasional beautiful laments of Dolores O’Riordan and you’ll have some idea of her calibre. Indeed it is like she's been around for ever as an established music stalwart with such legendary luminaries as her peers. ‘Hemispheres’ is a true musical and emotional journey through Jess’s own reflections, thoughts, fears and truths- all underpinned by pleasing retro 80's vibes in places and and well crafted melodies and musicianship throughout.

First track ‘Stupid Trick’ is indeed a very fun and vibey but also polished affair with Jess' smooth vocals soaring through 80's punchy synths. Feels like this should be a sync treasure: I could see this track being used extensively on female led HBO TV (Sync people take note!) ‘Dance in the Rain’ is a much moodier affair entirely and you can’t help but love the flatline synths running through it . Again, echoes of 80's pop classics musically- but counterpointed with complex lyrics (with maybe a waft of Eurovision gem in there too.) It all sounds very deliberate and, given the composer credentials she has, this is not surprising . 'Secrets’ is poppy and playful but still with the gorgeous vocals on show whereas ‘Lights’ is more complex, synth-wise, and has 'grown up' soundtrack written all over it. One can imagine this track setting the scene in an 80’s cult classic featuring Christophe Lambert. ‘Don’t Fight It’: I have reviewed this track before as a single and I live by its worldly wise double edged message. Smooth as silk vocals acknowledging our life experiences of yin and yang, sweet and sour, light and dark. Sometimes it is just better to roll with life’s punches (hey, what else can ya do?) Better let it happen so you can grow. Kind of a sad resignation but also arguably a positive mantra too. ‘West Hollywood’ drops you straight into the City of Lights with echoes of Stevie Nicks, for sure. Reflections and observations par excellence ‘Cynical’ has a retro feel too with punchy electro beats like a heartbeat going through it, which ties in well with the ruminations on a troubled complex relationship. ‘Hoops’ : dare I say it, I can imagine this being a track especially written for Leona Lewis. It just has that universal appeal to it and lends itself to soaring versatile vocals, dreamy but catchy at the same time. ‘Cover Fire’: Oh lord, this one hits home and feels very personal, like you've been stabbed in the heart and have to deal with the intense fall out. Also feels like a track that, when played live in an arena setting, would be a crowd pleasing ‘punch the air’ track. ‘Cathedrals’ is a cover song of the Jump little Children track, made more theatrical with Jess' beautiful crystal cut vocals and accompanying piano and mournful cello woven through. There's a whole gorgeous narrative there and her emotional rendition makes you feel you're in the story with her.

With ‘Hemispheres’ Jess Chalker has cemented her status as a strong solo artist. She has the musical prowess and talent to stand alongside celebrated artists like Tori Amos, Kate Bush and many others. All she needs now is the recognition and kudos from the media powers that be to elevate her there.