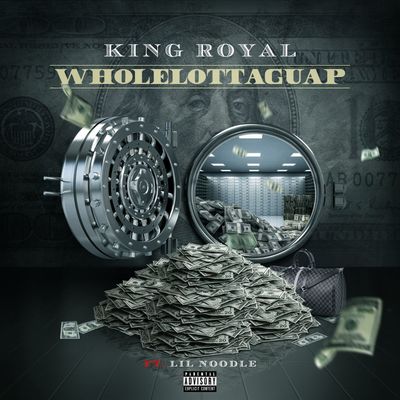 Exploring musically, the duo soar above the scene with a sound unlike anything else in the game. In addition, 'Wholelottaquap' has an unorthodox quality that is instantly exciting, and the energy from both star performers reaches new highs. It begins with a subterranean sounding overture, with beats tapping away in the background, almost as if someone were using an 808 at a subway station. The bass rises quickly, laying down an infectious foundation, while the rap propels the track ahead.

King Royal, predictably, opens the mix, and his vocal performance is impressive. He adds a unique tone to the mix, and while he borrows a few hints from the game's greats, he stands out on his own. Lil Noodle snatches the spotlight in the refrain and provides an entirely different quality to the vanguard. Both rappers are so diverse, which is part of what makes this track so intriguing. Also, both possess a true versatility that creates dynamism.

Both rappers come together in the closing stanza and synergise with their lyrics meeting one another. The beat also takes a step back, allowing their narrative to shine even brighter, and they finish on a high note.

Overall, a solid track from both King Royal and Lil Noodle.