Turn The Music Up Loud 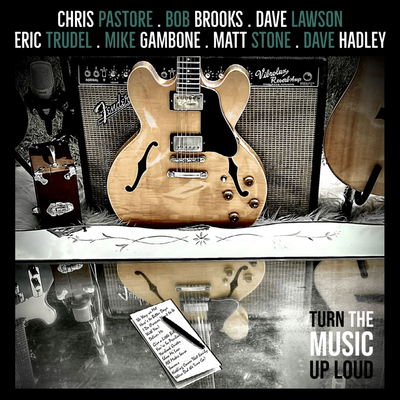 Turn The Music Up Loud

Chris Pastore just released his first album in over 10 years entitled 'Turn the Music Up Loud.' While he's never left the music scene, playing and touring with the band Fat Apple and meeting lots of talented artists along the way, he now gets to run the show. His 12 song album features a multitude of Chris's musical friends that fellow artists that he's had the pleasure of sharing the stage with in the past.

Recorded at the Wrightway Studios in Baltimore, 'Turn the Music Up Loud' is a compilation of old and new songs without the boundary of genre. It covers country in "Yearbook Quotes" and jazz-funk in "Give A Little Bit." His overall sound and vibe is that of a Tedeschi Trucks Band meets The Beatles with some funk trickled in for some songs.

Each song carries meaning for Chris, like coping with his parents divorce in "It All Makes Sense" and living through a never ending pandemic in "Seasons." That being said, each song brings a little bit of hope, joy, and love that Chris hopes will spread among his fans and music lovers alike.

With a musical talent that can't be denied, Chris Pastore's album is everything I hoped for. His distinct boundary-less guitar turns 'Turn the Music Up Loud' into a magic you won't find anywhere else.

Give 'Turn the Music Up Loud' now on Spotify, Soundcloud, and Apple Music.