Hit The Deck Festival Kicks Off! 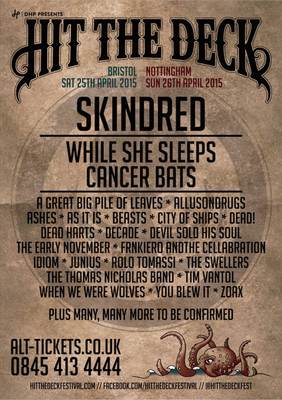 This year’s Hit The Deck Festival had a pretty questionable lineup, especially when a final wave of bands was never actually announced, probably because two of the formerly six stages were removed from this year’s shindig – a massive downgrade. With lots of smaller bands, the day turned out to be primarily a day of discovering new music, before seeing the three headliners.

If the downgrade wasn’t bad enough, the wristband exchange was downgraded too, resulting in only one queue for everything and lots of waiting around. The first band we managed to see was You Blew It! a generic emo quartet who appear somewhat disinterested and nervous, never looking at the crowd – the most exciting part of the set was when the smoke machine turned on, to the absolute bewilderment of the bassist.


Croydon 3-piece Bad Sign are a very different story. They waste no time in making an outrageous amount of noise for only 3 guys. Rifftastic from the get-go, the post-hardcore outfit look like this is exactly where they belong, tearing down the Rock City Basement stage. The vocal range on Joe Appleford– an animal of a man - is dumbfounding. High, low, yelling, screeching – you name it. Seeing just one new band blow you away like this is what makes it always worth heading to small festivals. Incredible.

“The dude from American Pie” – Thomas Nicholas – actually has a somewhat decent voice, but a combination of boring, generic songs, and a constant over-emphasis on the fact that he was in a famous movie made watching The Thomas Nicholas Band unbearable, causing everyone to leave. What’s worse is that he assumes he’s innately funny, and enduring his shit jokes marked the low point of the entire day.


I always say how much I love seeing small bands play Rock City’s main stage, just to see what they do with all the extra space. A great example followed in the form of Hacktivist, who erupt onto the stage, balls out, and they’re fucking flawless. Rappers J Hurley and Ben Marvin make full use of the extra space, skipping side to side, the excess energy obvious from minute one. Aside from the excellent performance of "False Idols", the band’s cover of "Niggas in Paris" goes down incredibly well, as it always does. For a rap/metal band who have come so far without even having released an album, the sky truly is the limit for Hacktivist.

Ain't no party like a H party Posted by
Hacktivist on Sunday, 3 May 2015


Down in the basement, John Coffey take the stage. They present an aggressive brand of punk rock done right, and it’s not too much that it’ll scare people off. Hailing from the Netherlands, this quintet appeared to be on a totally other level of insane and have quickly become my favourite Dutchmen. Ignoring the very real chance that they now suffer from some minor brain damage due to the sheer ferocity with which they banged their heads, John Coffey had several moments which made their set stand out – including singer David (sporting a ridiculous moustache) scaling the speakers in one song, then moving the entire crowd to the left for the next, to make space for his band to lose their shit on the Basement floor. David’s voice is perfect for the genre, and the crowd got so into it that I guarantee the band have left with at least 100 new fans.


Over in Rescue Rooms are The Swellers, playing their fifth-to-last show ever. Almost unbelievably, I have never ever heard of them, but they seemed to be a big deal, and they effortlessly drew one of the biggest crowds of the day. Their energetic and upbeat brand of pop-punk is infectious, and the fact that they have a very good singer is just a bonus. Quick on the wit and not too over the top with regards to this being their last show, they’ve undoubtedly made a good impression on those unfortunate enough to have never seen them before – myself included.


The first of the three main stage headliners – Cancer Bats – are next. When you realise that the band name structure of Disease + Animal is intentional, hearing Pneumonia Hawk played live is ever-amusing. From start to finish, as he always does, lead vocalist Liam Cornier looks like he recently escaped from a room with padded walls and no door. Still incredibly loud, the man has undeniable stage presence / charisma. He made a big (but not over-dramatic) speech when a guy in the crowd lost his phone. Liam beckoned the crowd to switch off all their phones for the purposes of “partying in solidarity”.


It wasn’t until 2008’s Sorceress came out that the pit erupted, but when it did, it showed no signs of slowing down. Chaos peaked when the band played their cover of Beastie Boys’ "Sabotage" – whether you like it or not, standing still is impossible if you’re anywhere near the main dance floor. An excellent set by the first of the three headliners, even in the face of the questionable decision to both open and close with new songs from an album that’s barely a month old.


Heading back to Rescue Rooms to catch Frnkiero and the Cellabration, I really didn’t expect much out of them. Needless to say I was more than pleasantly surprised by the performance of the band, and by the atmosphere of the room (ignoring the sole crazy girl who relentlessly screamed at everyone as she pushed to the front). Frank Iero’s band write no-bullshit punk rock songs, and the execution was perfect. Initially dismissing this band as a desperate attempt to keep MCR alive, I was quickly proved beyond wrong, and this festival performance has firmly secured these guys at the centre of my radar for the near future.

To read the 2nd part of the review and listen to Blaine's interviews with Rolo Tomassi and Skindred
click here. To find out more about Hit The Deck festival
click here. Words by Blaine Marshall