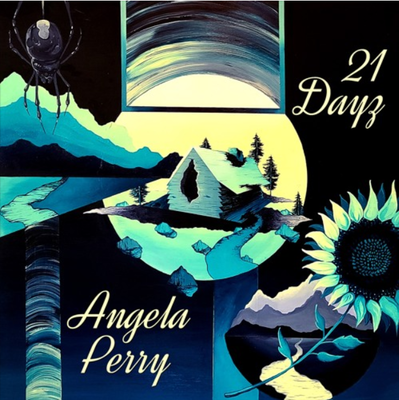 Angela just released her newest folk and country rock album, '21 Dayz.' This 9 track album is a stunning collection of poetic songs with deep meaning and love behind them. It showcases her Bonnie Rait-like vocals and her Joni Mitchell sound and style.

She kicks off the album with the titular single, "21 Dayz," a blues infused country song about kicking that bad habit you have. It takes 21 days to change a mindset or a habit. "21 Dayz" was inspired by those who have had a person in their life that is no good but they have become a hard to resist habit. "Colorado Blues" is a slower country song with a small sprinkling of the blues. She sings about a love leaving and never coming back, using a 7th in many of the chord structures to represent that Colorado is where the blues can and does happen," shares Angela.

"Sister Cry" is a country song with a hint of rock. While the music is upbeat, she sings about the all too often occurrence of women being murdered and going missing, especially indigenous women for being who they are. “'Sister Cry' was written from the victim's perspective as a plea to all of us “who look the other way.” The word WHY in the song asks a question that can not seem to be answered not only by the victims but by us. They are crying for all who too blinded to see. Almost to soften things up a bit, "Sunflower Child" follows. This beautiful acoustic folk/country song is by far one of her best. She recently released a video for this song and dedicated it to the Ukrainian refugees. Sunflowers are a sign of strength, perseverance, and resilience as they can grow in any condition and adapt easily to their surrounding environment.

"Hunger For You" is the most bluesy and rock stylized song. It starts in minor giving a small sense of urgency. The lyrics are used sparingly, showing the power that hunger has over us, both literally and figuratively. "Fallen" is a slow acoustic song with Latin undertones. It's about falling from the mountaintop, your fall from grace, due to decisions we make and how those decisions impact us. "Not Home Anymore" has a folk and blues sound. She sing about the stories that old houses can tell, what does the creak in the floor say? What do the walls want to say?

"Midnight Blue" starts in low minor, giving a cabaret vibe. It's about the illusion you and your lover have of each other. Sometimes, fantasy is better than reality. The album closes with "I Put a Spell on You," another song with a minor start, but this song has a folk-rock sound and tempo. Originally sung by Screamin Jay Hawkins, this song speaks of weaving a magic spell leaving one who can not think or who even wants to think about the consequences of what will happen.