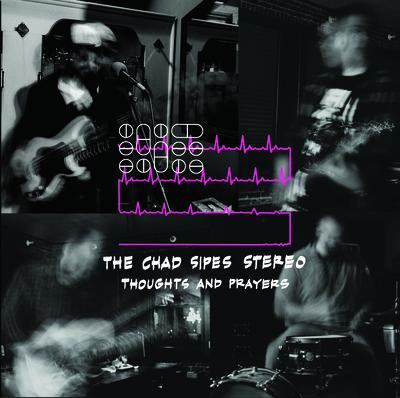 Thoughts and Prayers, the new alternative rock and 90's grunge album from The Chad Sipes Stereo has an overall sound reminiscent of the likes of Weezer, R.E.M., Green Day, and Foo Fighters wrapped up into one. They took on a non-linear narrative of the effects of the opioid crisis, from being medicated as kid to stealing from your neighbors, and even parenting using medication.

The opening song is their hard rock and grunge song “Every Single Kid,” taking on the idea that while every kid has different experiences growing up and are each going through different things, what they all have in common is being medicated by their parents. This lays out the rest of the album, that some kids get addicted to medications. “Pharmacy” is another hard rock song, more like a Green Day meets Weezer sound, that takes on the experimental stage of drug addiction. They sing “Every single house is a pharmacy.” The melody and beat is infectious in this song and has a slight melancholic feeling that takes over. It exemplifies how easy it is to be sucked into addiction and how much it really takes over your life.

“New Prescription” has a full ‘90’s grunge vibe, giving off strong Foo Fighters sounds. This song is actually familiar. It’s about how more and more people become addicted to pills or other medications because their doctor’s gave it to them. This leads you into the 4th song, “Pill For That.” This song gives us a break from the darker themes and allows us to acknowledge that pills can actually do good. It’s a lighter pop-rock song, a lot like Green Day. It's a reminder that while pills can be addictive, they are also a lot of peoples saving grace. This song is the positive spin on pills and medications, even joking in the lyrics "my girlfriend wont come back, they got a pill for that."

“Bruise on You” is more conceptual than the other songs. This softer rock song, reminiscent of Dave Matthews meet Nickelback, is about the bruises that never go away, that spot that’s always there and will always hurt just a little, singing “You’ll never lose the bruise on you.” This could reference both the effect people you know who abuse drugs have on you and the effect of drugs on the people who abuse. In both cases, it never goes away.

“Therapy” is upbeat with an alt rock chorus and an art punk sound. It actually takes us back to “Every Single Kid” and “Pill For That.” It takes on the parenting styles of these addicts in therapy, singing “Dad’s not home/off to the airport/mom can’t feel/that’s what the wine’s for/another kid, another family crisis/babysat by digital devices/why won’t this kid stop crying/medicate them, you may as well try it.” This character shares their souls and eventually gets to the root, singing, “The ice breaks/the tears flow.” This leads us into the next song “Ground Score,” another alt rock song that sounds like Foo Fighters meets R.E.M. This song is about wanting to stop, but you can’t quite stop.

“Ground Score” leads us into “Relapse,” a chaotic and fast paced song with heavy guitars. It’s about trying to stay sober and how hard it is to do that. They sing “The greatest failure is failure to try” and “Risk is high when home alone.” They really exemplify how tough it is for an addict to stop even if it’s their greatest desire. After the chaos of “Relapse,” we get “Dirty Secret,” a soft and quiet song with deliberately picked guitar. The guitar picks up when the secret is revealed, when it’s no longer locked inside and you lose your mind.

The album ends with the titular song, “Thoughts and Prayers,” inspired by the musical Hamilton as he claims that he imagined this track as a curtain call. It’s upbeat and hopeful, though it doesn’t have a happy ending. It is about a fictional character that is sober, but is now sick because of all the damage to his body. The good thoughts and prayers swirl around until the very end, but ultimately cannot save him.

They really tackle the opioid/pill crisis from every angle. The lyrics are poignant and honest. The music is both catchy and dark. It’s a raw album that opens the listener’s minds to the world around them. It’s truly an album that we all need to hear.