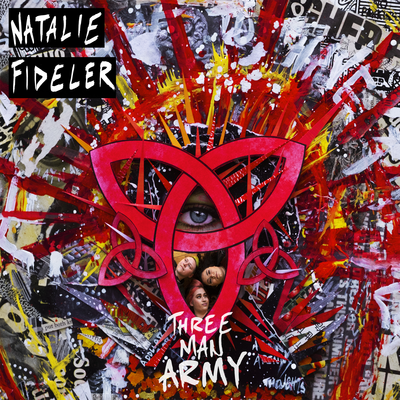 Natalie Fideler is the frontwoman for her trio, lending her vocals and guitar sills, alongside bandmates Hailey Jacobsen on bass and Leigh Underwood on drums. The band just released their sophomore album, 'Three Man Army.' It's an alternative rock album with sounds of Alanis Morrisette meets Twenty One Pilots meets Counting Crows, while Natalie's vocals are reminiscent of Natasha Bedingfield meets Carole King.

'Three Man Army' boasts of 11 infectiously catchy songs, each capturing a singer/songwriter sensibility with a rock and punk-pop sound. Lyrically speaking, she's open and honesty while also injecting some humor, giving her songs a human aspect and completely relatable. She sings about her own inner growth and subsequently the growth we all show.

Her songs vary greatly, for instance, the opening song, "Kisses" is a slower acoustic song about what real love is, both for yourself and towards others, while the song "Caffeine Headache" is more of a grunge and emo-rock song that tackles the topic of what it's like when your loved one succumbs to substance abuse.

'Three Man Army' boasts of a few ballads: a rock ballad in "Oil and Vinegar," a piano ballad in "Teach Me," and another piano ballad in "I Found a Way." But she has more pop-rock sounds as well: "Dance With Me" has a Miley Cyrus "Party in the USA" feeling to it, "Cloverleaf" has a Taylor Swift meets John Mayer style, and "Abe Lincoln (La Di Da)" has a Counting Crows vibe.

Each song is worth the time, even "Intermission," a sound clip of the band talking and having a good time. It really gives you a sense of who the band is and provides a playfulness to their music. I would listen to this album if you like music at all.