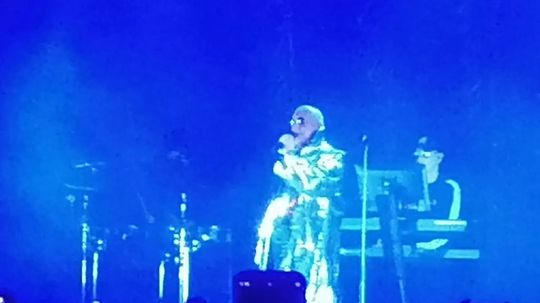 During the pandemic the Passport Back to our Roots charity set up a fund to help the people whose livelihoods were brought to a grinding halt. The people who relied on our thriving music scene for their income suddenly found themselves out of work overnight. Passport organised raffles with once in a lifetime gigs as prizes. The one I entered was for the Pet Shop Boys, a group that both my wife and I are obsessed with and have been since West End Girls came out. Always on my Mind was Number 1 when we went on our first date and the music of Neil Tennant and Chris Lowe has soundtracked our lives ever since. When we found out we had won, we knew that we were in for something very special. A small crowd in the Electric Ballroom in Camden was the venue for the most intimate gig the Pet Shop Boys will probably ever play.

The evening started with the menacing chords of Surburbia, a slice of life that was very relevant in 1985 and remains so to this day. For the first time at a Pet Shop Boys concert, I could feel the music thundering through me in a way that told me that however good I thought this was going to be, I was underselling it! It was visceral and mesmerising, and it was the music as I had always wanted to hear it. Straight away, you could see Neil Tennant was in his element in front of a crowd of die-hard fans. I have never seen him smile so much and he was clearly blown away by the atmosphere as much as we were. The set was a slightly altered version of their current Dreamworld tour, but compared to the tent in Greenwich, where we paid a fortune to be at the back of an acoustic dead zone, it might as well have been a completely different set. Looking back on the set, a couple of things really stand out. First, the connection that we felt with Neil and Chris and with each other, and second the fact that this greatest hits set barely scratched the surface. Their back catalogue is second to none and for every song they included they could have included at least one more, and that’s before getting to their amazing album tracks, b-sides and rarities.

So, rather than going through every song, I am going to pick out my highlights. Rent was the first big singalong for our part of the crowd and Neil was quite happy to let us do a lot of work all night while keeping control of the gig like the consummate MC that he is. I know that pretty much every song was a sung with gusto by the crowd, but certain songs hit the mark more than others. The marvellous mash-up of When the Streets have no name and Can’t take my eyes off you was joyous and inspired, and the latter, in particular, was incredible fun to sing along with. I have never heard the songs or the vocals sounding better – Neil’s vocals that is, the crowd’s vocals had more keys than a jailer! Not that the quality of the singing mattered, all that mattered was the celebration of the best British group of the last four decades. ‘Our song’, Always on my Mind, made me emotional as it always does, but it was a new experience with its power and its effect on an audience that had lost all its pandemic discomfort and were ready to be transported to somewhere beyond our everyday lives.

One of the joys of any gig is discovering songs that have never really hit the mark on record utterly transformed as a live experience. Chief amongst those in this concert was their 1989 hit It’s Alright, which had always been in the also ran category for me – although that’s very much a comparative term with the Pet Shop Boys. Last night I finally felt the power and euphoria of the track. The bass coursed through my body and just carried me off. I have never had the experience of being totally hypnotised at a gig before, but it happened with that track. Nothing existed apart from the beat and a song that became an experience like nothing else. It’s always been one that my wife has loved and, having completely lost myself in it, I now love it too. The real majesty of the Pet Shop Boys was on display all night, and it was a return to their imperial period for me in every way, but the last four songs just encapsulated their genius. Go West was an emotional roller coaster, ecstatic music, pounding rhythms, singalong chorus and that air of wistfulness that pervades the song. It was just the start of the final run, followed by one of the best songs ever to hit the Number 1 spot, It’s a Sin. It is an epic with heart, humour and even some Latin for those who want to learn something! By this point in the night, the alcohol was flowing and so was the crowd, every single one of whom just blasted out the lyrics as Neil Tennant directed us to do exactly what he wanted. Next, was the song voted by The Guardian music writers as the best Number 1 ever, the majestic, career starting, career defining West End Girls which sounded as urgent and powerful as it has ever done. Finally, the bittersweet Being Boring which was cathartic in its effect both lyrically and emotionally. The cheer when Neil introduced Chris during that final song was recognition of the quiet genius of the keyboards who has brought some of the most incredible synth music ever written to glorious life. He doesn’t say anything on stage, but his presence is immense and irreplaceable. Neil Tennant himself is the ultimate front man, but I can genuinely say that he has never been better than I saw him at the Electric Ballroom. The love that flowed from us to him was palpable and the love and affection that flowed from him was its equal.