Together In Love And Separation 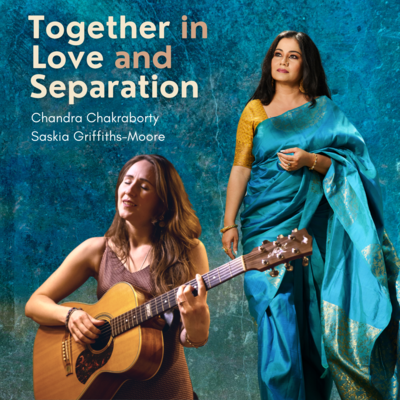 Together In Love And Separation

'Together In Love And Separation' is the album on the lips of all those who relish their music soothing and just that little bit different. With Saskia Griffiths-Moore and Chandra Chakraborty guiding the way to paradise, it is a lovely blend of both the traditional culture of India and folk from the western regions.

The record, which sees a plethora of styles and elements combined into one boiling pot, is music to the ears, with utopia only being a touch distance away. It starts with 'She Moved Through The Fair', a traditional Irish folk gem which has been brought back to life with even more vitality! The soulful vocals are instantly moving!

'Country Roads' appears three tracks into the eight-track CD, with Chandra opening the release followed by Saskia with a stunning up-to-date vocal which left us in amazement! 'Water Is Wide' is the second to last track on the album, and it demonstrates how great music is when intertwined with other cultures and inspirations.

The ladies were to play the record on the 19th of July at Cecil Sharp House in London, sharing the stage with members of the London Chamber Orchestra headed by Úna Palliser. However, due to the weather at the time, the organisers and artists felt it best to postpone the date to a later date. The event, which is to be a night packed with sheer charisma, will not be the first time the record has been showcased, with both Saskia and Chandra performing at the Royal Albert Hall just a few months back, but it will likely be just as magical.