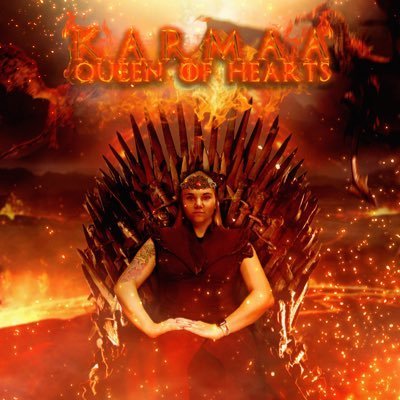 Queen of Hearts by Karmaa is the US artist’s first full length album which follows on from the superb This is Me EP which was released at the start of 2022. My favourite track on the EP was Work in Progress, and this album demonstrates that she is more like the finished article.

The first track, a short introduction that starts with an organ-based tune and a voiceover giving notice of the start of Karmaa’s reign, is called Khaleesi, which I find very interesting. When you consider her journey from the consort of the Khal to a self-proclaimed queen in her own right, it perhaps hints at the type of trajectory that Karmaa sees herself on. At another level, it could reflect the need for a female artist, in particular, to plough on against those who doubt her.

The first full track is AFFIRMATIONS which asks the listener to affirm along with her that, among other things,

I’ve got a big old heart.

I believe in me so I’m winning from the start

It’s an incredibly catchy tune with a whip smart rap delivered with humour and attitude. For anyone who follows Karmaa on social media this approach to life and to herself will come as no surprise. She is a person who tries to lift others up as much as herself, believing that the act of supporting others will pay dividends. It’s a great approach to life and makes for a superb track. For a fan of obscure 80s music like me, the ending was a delight as it reminded me of the fantastic Einstein a Go Go by Landscape!

You got IT starts with a chant that sounds like a classical chorus, reflecting the breadth of Karmaa’s influences. Subtly and effectively the chant continues very softly in the background, giving a real depth to the music. The song itself is a very funny slice of life where Karmaa promises to ‘get the neighbours knocking’ as a result of her night-time exertions! It is the talk that you hear in clubs as the dance, the atmosphere, the heat and the drinks start to work. Should we take it seriously or will club talk stay just that?

Take you home is a gorgeous love song that demonstrates the increasing range of Karmaa’s music. Lyrically it is as good as ever as she reflects on the person she just met and wonders if it’s something that will work outside the club and whether it will match up to the racy promises in the previous track. She wonders if there will be any chemistry if they take the next step and they carry this on at home. It’s a question we have probably all asked at some stage and the answer never seems to be clear cut except in the rarest of cases. I loved the softness of the vocals on this track and the way that she is able to take the typical love song and gently subvert it.

Next, we have burn SLOW which is a smoky Latin inflected track which oozes quality and sensuality from the first note. It could well be the sequel to the previous track as the magic of attraction takes hold and makes everything else fade into the background. I think the appeal of this song is the way that Karmaa controls the vocals and the rap without ever losing the impact.

EVERYTHING is the story of the relationship that has moved past the initial attraction and become on/off and increasingly stormy. However, it is a relationship that is somehow one neither party wants to escape. Karmaa herself knows she can’t resist this person and with that knowledge comes an acceptance of the downs that allow her to enjoy the ups. There is never the sense of this being a toxic relationship, merely one where both parties can irritate as easily as they infatuate each other.

Pretty Lies has a beat that sounds like the 80s industrial styles of Depeche Mode and others. Joining her on this track is FPN Norway who delivers a moody and atmospheric performance that complements Karmaa perfectly. It is an interesting song, lyrically, which reflects on the difficulty of hearing hard truths which causes so many people to take refuge in those pretty lies.

CRYING Wolf (Interlude) is a song that looks at the other side of that relationship where pretty lies are being told and she starts to realise her love is being embezzled, and the only reason she recognises the situation is because they have been here before. This person has cried wolf once too often and it’s time to get rid of him. There is an edge to this that tells you Karmaa is not joking and will not put up with it anymore.

Without you is the penultimate track and it’s a cry of pain. Although Karmaa knows that one day she will be OK, today is not that day. Her heart has been broken by the end of that relationship. It has ended without warning and without compassion. She doesn’t know what is true anymore, so wrapped up was she in the life they shared together. It is another track that shows Karmaa’s developing vocals that can now confidently tackle any song in any genre and know that she will be able to nail it. The mixture of sorrow and determination is beautifully conveyed.

The final track is I AM, which is a statement of intent that sees Karmaa affirm

She knows that she is going to get through this and grow because of it. This is Karmaa’s real affirmation. It accepts that sometimes life is going to be hard, sometimes its going to be brutal, but that you are going to survive, and you are going to thrive. The alternative is to go under and that alternative was explored in This is Me to devastating effect. By the way, if you haven’t listened to This is Me you absolutely must, it’s a work of brilliance.

Karmaa is an artist who is constantly evolving, and her first album is a triumph. I pride myself on being objective when it comes to music, but there are some artists who I really want to see go from strength to strength and Karmaa is one of them. There is definitely more to come from her and I cannot wait to hear what’s next. Karmaa is a Queen in the making.