A Voyage Of Boundless Imagination 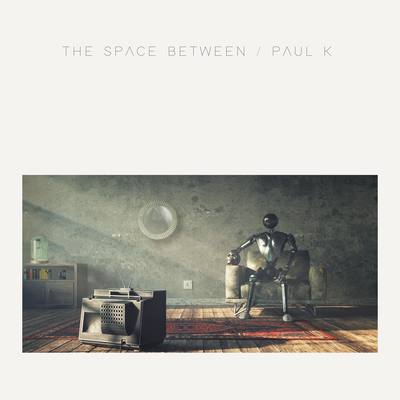 The latest album from Paul K, The Space Between, is a departure from his usual solo work in that it is a work that has significant lyrical content. His previous albums have all been instrumental in nature with just occasional words, either from guest singers or from recordings. That said, the album is designed as a companion piece to The Fermi Paradox, which was about space and the possibility of contact with alien species. In this, an astronaut has volunteered for a one-way journey to the deep reaches of space with only an AI robot for company. The album tracks their journey.

The first track, True Splendour, sees the astronaut looking back at the earth that he is leaving for the last time. It is a song full of a mixture of regret and anticipation and it unsettles the listener as they think of how they might feel leaving everything and everyone behind. This is clearly a decision that the astronaut has made knowing what is involved, but in True Splendour it fully hits home when the ship blasts off.

The next two tracks, Rocket Ship and My Little Black Angel have an unmistakable echo of Blackstar era Bowie and they see the astronaut starting to come to terms with the true weight of his decisions. He tries to lose himself in the scientific exploration and its magnitude, distracting himself with experiments and observations, but he starts to succumb to the pain of loneliness. He aches for someone to talk to him and perhaps wonders if the reflections that he is committing to his computer will ever be heard by human ears, or even if there may be human ears left to hear it.

Celestial Son is a funereal track which is appropriate for a reflection on whether the love that he felt for his wife and family is in any meaningful way reciprocated anymore. If the person you loved decided to leave you for ever then it is very likely that there would be a combination of betrayal, anger and confusion. He muses,

‘I wonder if she still cares. I wonder what’s beyond the stars?’

as he tries to come to terms with the fact that he now has no more left to say to the woman he left behind. It’s an interesting mixture of tenderness and selfishness that reflects the way that all those who have the desire to explore are in thrall to their choices. Sleep Within continues this theme as the astronaut stops looking back on his old life during his waking hours, only to have it invade his dreams. In those dreams, however, he is unable to find those he knew before, and he sees that his world is ‘out of synch’ with the Earthbound world he left.

Blossom Trail sees the astronaut reflect on the emptiness of space as he sees it leading nowhere, and perhaps being ultimately meaningless. At this point, the journey has been in progress for decades and his mind is desperately trying to hang on to the humanity that is no longer something he can take for granted. What is the purpose of his journey? Is there any real purpose? Is he, in any real way, part of the human race? His only companion is a machine, so does that mean he has more in common with circuits rather than flesh? Spektr is the lament of someone who has travelled through the stars and has finally lost the essence of his connection with humanity. In a sense, the ageing process in this spaceship has caused a form of dementia where the mind is unmoored but occasionally sees a familiar emotional landmark. These two tracks seem to me to be very dark and it is possible that this is the point at which he acknowledges that he will die alone, unacknowledged, unmourned and forgotten.

Haze Chameleon has a valedictory tone as the astronaut reflects on the way that nothing in his life has ever really remained constant apart from the desire to explore. He has been many things to many people but in the end, there has been nothing keeping him in place. That is what pushed him to take this mission for better or for worse. He knows the end is near, so it is time to put his thoughts in order. Artifact is the final testament of the astronaut, dictated to the AI robot with no expectation that anyone else will ever hear it. However, the robot has developed sentience on the long, long journey and is now taking on the personality of the astronaut. In that way, the astronaut will continue to survive throughout the impossibly long journey that lies ahead. It is an absolutely beautiful track and a mind-bending concept that reflects Paul K’s amazing imagination.

Pareidolia is a reflection of the effect of all those lonely years in space. Now, near the end, he can see his wife as he knew her all those years ago and his final regrets at the decision, he took are the clear undercurrent to this track. He will never see her, or anyone else, in real life so his mind is compensating for this loss by remembering pictures from his old life. Black Tape is the life story he tenderly commits to the memory of his sentinent AI companion. It is a very affecting concept that perhaps reflects everyone’s desire to leave something of their life behind for people who might happen upon it in years to come. What will happen to the voyage? Who, if anyone, might come across it? In the end, does it really matter?

Coda sees the astronaut finally die after years of reflection and complete loneliness. It is a very sad, elegiac piece of music that sounds like a hymn and reflects on a time when there will be no more yesterdays for him. Perhaps because he has spent so many years trapped inside his own mind, there is a sense of blessed relief that this isolation is finally at an end. There is an uplifting spirituality to this final release that is supremely moving.

Transient sees the AI robot, now an extension of the astronaut in some ways, take over the rest of the journey, however long it might be. A piece of machinery on its way to a destination unknown, or perhaps no final destination at all. You can now almost sense the robot with its new found sentience starting to reflect on its own purpose. What does the computerised mind make of this? You can hear it struggle with the curse of self-awareness as it realises that, like the astronaut before it, that there has to be some purpose if there is to be any sense of peace. We don’t know whether that peace is something that the machine can find, but we do know that until or unless the circuits fail it is an inner journey for the robot as much as it is an outer journey.

The music throughout this album is mesmerising, and it continues the creative journey that Paul K started with Omerta. I would love to hear the music in isolation at some point so that I can lose myself in my own thoughts as I did with all of his other solo work. That said, the narrative of this album was absolutely essential to give it the depth that the story needed. Paul has proved once again that he is the most original artist working in music at the moment and he has added another layer to his work by committing his thoughts directly to the listener.