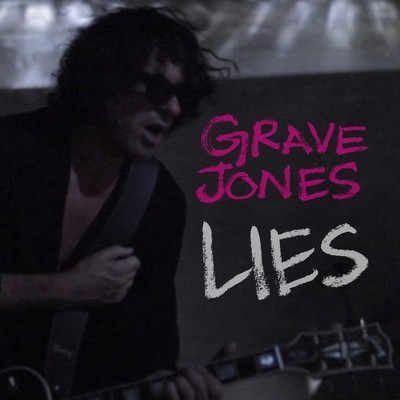 Fans of Alice in Chains! listen up, because you’re going to want to hear about this! Grave Jones is here with a new release, which will be accompanied by a music video! With his single, ‘Lies’ (video directed by Karl Hadife) there is plenty to be excited about. Ready to blow you away, ‘Lies’ is something you do not want to miss!

With ‘Lies’, Grave Jones changes approach. From being a pop-rocker in the past, to now a fully-fledged grunge-rocker with an edge that will keep fans on the edge of their seats throughout. With a drumbeat to get the blood-pumping, followed by a solemn sounding bass guitar providing Grave Jones the perfect platform to start his vocal performance, with lyrics that keep you hooked waiting for the next line. Without wasting any time, ‘Lies’ bursts into life with Jones giving screaming chorus that makes you turn the volume up to 11 – with his band matching the tempo and energy that Jones’ vocals command, it’s an example of musical ability from everyone involved that is second to none.

It’s clear to anyone who listens to ‘Lies’ that Grave Jones is giving it everything he has into this song, with so much of it requiring vocals that don’t miss a gap, a level of guitar playing that can only be acquired from years and years of hard work and lyrics that take musical talent that is beyond words. ‘Lies’ doesn’t take a breather, it doesn’t come to a halt, it’s a no-holds barred rock anthem that seeks to blow you away throughout, and Grave Jones does it with ease. If you’re ever lucky enough to see this performed live you can absolutely guarantee that it will blow the roof off, feeding off the energy of crowd.

With visuals to accompany ‘Lies’, it’s difficult to imagine what visual style would fit a song of such emotion. However, with expert directing from Karl Hadife who has worked with Grave Jones in the past, we get a video that fits the mood of ‘Lies’ perfectly. Vacant and dark, focusing on the band and Jones’ who are all in black, with a backdrop of women whose role fit the lyrical content so well. The video overall is the perfect fit for the music, matching the tone and mood with expertise that it really does add to the music.

Grave Jones has made a genuinely fantastic single with ‘Lies’ – introduces itself well, and bursts into action with musicians whose command over vocals and instruments is so impressive that it’s hard to ignore. Everyone who loves good music should be in on this, and with more expected to come in the future from Grave Jones with his album ‘Heartrage Hotel’, ‘Lies’ is the perfect introduction. Do not make the mistake of letting this go under your radar!